Well, I just couldn't leave them alone! Having posted my last lot of photos of my first German cavalry unit earlier this week, I had to go back and change some more of those heads. In the end I decided to leave the hairy chap at the back of the unit, but the standard bearer and the swordsman on the flank had their Factory heads popped off and the search began for more suitable replacements. I have plenty of Warlord German and Celtic heads in my bits and bobs box, so they were selected to go top the shoulders of the two headless horsemen. As with the ones I did earlier, I had to make a neck for each of the heads using green stuff and was a bit concerned as I was working on a figure that was already painted. As it turned out, I ended removing the figures from the base to make working easier and one of the riders came away from his horse anyway! Re-painting the replacement heads had to be done pretty carefully, to avoid spoiling the rest of the figure, but proved to be a lot more straightforward than I thought it would be. Anyway, lesson learned, I've already sorted out six more Warlord heads ready for the next unit. 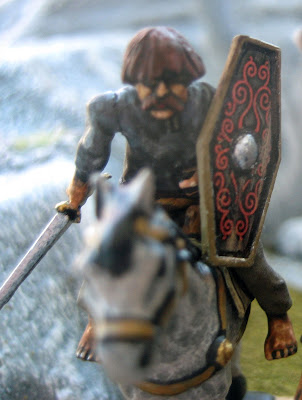 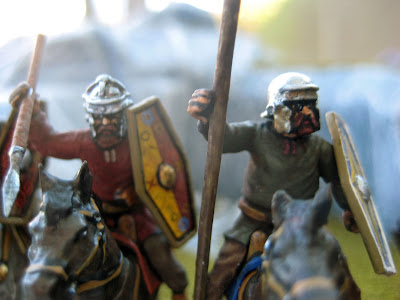 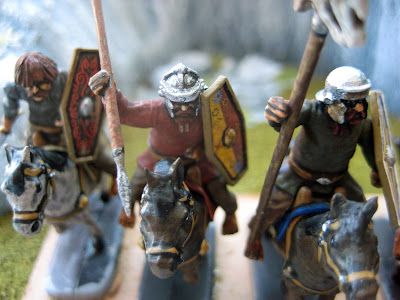 All in all, I'm a lot happier with my first cavalry unit, although I wish Warlord would start producing some plastic German (and Roman Auxiliary) cavalry. Hey ho! Back to the painting table, I've got another twenty Suebi warriors to do to finish my next infantry unit!

I've bought Wargames Factory figures before and had mixed feelings about them, but when I was searching for German warrior cavalry to paint for my Batavian Revolt army, I couldn't find any others that were in my price bracket, so decided to give these guys a go!

In your pack you get enough bits to paint up twelve figures, which fits in nicely with my chosen organisation for an army using Sword and Spear rules. I'm putting six cavalry figures on a 12cm by 6cm base, so I get two units for the £14.50 plus £2.50 p&p that I paid for the pack. I bought my pack from the Veni Vidi Vici website, which was the best value for money I could find on the day I ordered. The packaging contains pictures of painted figures and a set of general construction tips, but no specific instructions on how to fit all the various bits together.

What I really like about the WF Germans is the horses. A lot of ancient period horses on the market look as though they have come straight from the stables of a race horse trainer training a horse for the Grand National! These little beasts fit in much better with what I imagine horses of the period to have been like. They are more rough, hardy, semi-wild ponies than thoroughbred race horses. They clean up fairly easily, with a sharp craft knife taking away the casting seems, which are in all the obvious places. Each sprue has six half ponies which, I think, can be paired up in any combination. I'm not that au fait with horse anatomy, so I put the halves together in as many different combinations as possible, without any particular regard as to whether the resultant pose was anatomically feasible or not! They look o.k. to me! The halves fit together fairly snugly, although I did treat the first two I assembled to some green stuff along the seams to fill in any gaps. With experience, I discovered that being a little more generous with the plastic cement (to aid the melting of the plastic) and filing along the seam with a micro file before the glue had time to harden, had the same effect. Each horse sprue also contains four different horse heads, which give you loads of combinations to make your unit full of variety. The heads simply glue into a slot created by sticking the horse body parts together. For me, the jury is still out as to whether or not the join around the head needs to be filled with green stuff, I did on some but then not on others!

The riders for the horses are not quite so impressive! The torsos come in two basic poses; one with the shield arm tucked in close to the body and the other with the shield arm slightly away from the body. There are lots of heads to choose from, but these were the most disappointing part of the set for me. The detailing in the casting is very shallow, which is a bit of a disaster if you like to use ink wash to bring out the detail; basically, there isn't a lot of detail to bring out! Unfortunately, I constructed three riders for my first unit, before it dawned on me that I could use spare heads from other sets I'd bought for my Batavian army. Because of the slightly odd way WF have designed their heads to fit the bodies, you need to build a neck before you can attach heads from a Warlord set. I used green stuff and made a blob to fill in the recess in the body and then carefully pressed my chosen Warlord head onto it. This made a clean fit for the head to attach to and, once the green stuff had hardened, the excess 'fat' around the neck was trimmed away with a craft knife. With an application of super glue to attach the new head to the neck, the job was done and now, I'm just deciding whether it's worth the effort of removing the heads from those first three chaps and replacing them with something better. The torsos themselves look a little bulky and angular and the belt is well out of proportion, looking a bit like a child's rubber buoyancy aid! The riders are glued to a separate saddle, which is excellent if you like to paint your riders before attaching them to the horse. Again, I experimented with both options and both work equally well, although traditionally I prefer to build the whole model and paint it complete. I toyed with the idea of drilling a hole through the saddle and into the rider to put a small screw through to aid holding while painting, but in the end, it seemed a bit too much like hard work!

The sprues have various weapons you can arm your warriors with and a slightly odd looking horse head standard. I lopped the head off my standard and re-attached it to a longer spear, which looks in better proportion to me, although I can see the logic in having a short standard pole when you are riding a horse; it must be a lot less unwieldy. The sprue has a whole load of weapon arms, which gives you all sorts of options for arms up or down. There are two types of shield, a large round one and a hexagonal 'coffin-lid' type. The good thing about the shields is that Little Big Man do sets of shield transfers for them! I kitted my first unit out with the hexagonal shields and I'll give the next lot the round ones. I've also utilized some of the spare shields (complete with LBM transfers) in the unit of Warlord Suebi warriors that I'm currently working on.

All in all, the Wargames Factory horsemen are good value for money. They are not going to win any awards for casting detail or quality of anatomical proportioning, but they will fit in nicely with the rest of the army and perform a useful role alongside the auxiliary cavalry, once I decide the best option for those!

I thought I'd upload some pictures of the units I've painted so far for my Batavian Revolt army. None of the units are based yet, as I'm totally focused on getting more troops painted. I suppose I'll have to take a painting break at some point in the not too distant future and have a mega-basing session to get them ready for the battlefield. So far, I have completed a deep German warrior unit of twenty-four figures, two cohorts of Batavian auxiliaries and a cohort of Legio I Germanica


Time for some pictures... 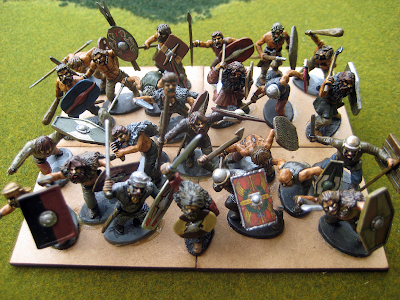 Somebody's not happy about how these legionaries have dressed their ranks! I suspect they are being told. in no uncertain terms. to close up ready for action.

I'm currently working on some cavalry for my army. I decided to try Wargames Factory's German horsemen... after a fairly disappointing start, I've started to really enjoy working on them. Should have some pictures and a bit of a review up for your perusal in the next couple of weeks.
Posted by Tabletop General on 07:02:00 No comments:
Newer Posts Older Posts Home
Subscribe to: Posts (Atom)