Have I found it at last? The perfect wargames army for someone who has the attention span of a gnat...

My problem is that, by the time I've finished painting a unit for an army, I don't have what it takes to start all over again on another unit which will be virtually the same as the last one. Different colours maybe, slightly different poses maybe, but, to all intents and purposes, more of the same. NOT THIS TIME!

A German army(ish) of the Batavian Revolt of 69-70 A.D. ,so far, seems to have enough variety to keep even me interested. I've painted a unit of twenty-four German tribesmen, a cohort of twelve Batavian auxiliaries, two command stands and am currently half way through a cohort of Roman legionaries, with no sign of my notoriously fickle enthusiasm abating to the slightest degree!

Now I've dug into this period, usually referred to as 'the year of the four emperors' a little bit further, I can not understand why I haven't tried it before. The suicide of the Emperor Nero triggered a global brawl amongst various Roman generals from around the empire for the title of top dog. Prior to the outbreak of this Imperial furore, Gaius Julius Civilis, a prince of the Batavi tribe, who had served under Augustus in the invasion of Britain, was falsely accused of treason and sent to Rome to face the judgement of Nero. The invasion of Italy and subsequent proclamation as Emperor of Servius Sulpicious Galba, lead to the release of Civilis and his return to his Batavian homeland. A series of unfortunate events followed, including the dismissal of the Emperor's German bodyguard, regarded as untrustworthy owing to their previous allegiance to Nero, and Civilis' re-arrest on more trumped up charges, all of which contributed to an eruption of violence in Batavia. With the onset of the Empire's domestic convulsions, Civilis took the opportunity to revolt against his former masters in a bid to create a niche for himself outside the control of the Roman Empire. Other neighbouring tribes soon joined Civilis, including the Cananefates under their leader Brinno, and combined with probably eight cohorts of Batavian auxiliaries and two, more or less reluctant, Roman legions (I Germanica and XVI Gallica) to create a formidable fighting force to face any attempt by Rome to re-instate control over the area. Indeed, one such attempt by V Alaudae and XV Primigenia legions resulted in a humiliating defeat for Rome in a battle near the modern Dutch city of Nijmegen.

The first of my two command stands completed, represents Brinno, the leader of the Cananefates tribe, and his trusty standard bearer. The figures are simple composites from various boxes of Warlord miniatures. Brinno himself being made up from parts of the Celtic sprues which come from the Warriors of Germania set(!) and the masked head of a Roman standard bearer. Being a true Germanic hero, he wields the severed head of a Roman centurion to cast fear and dread into the hearts of his enemies! The standard has a Cesarean period shield attached, just to show how long the Germans have held sway over their Roman neighbours! 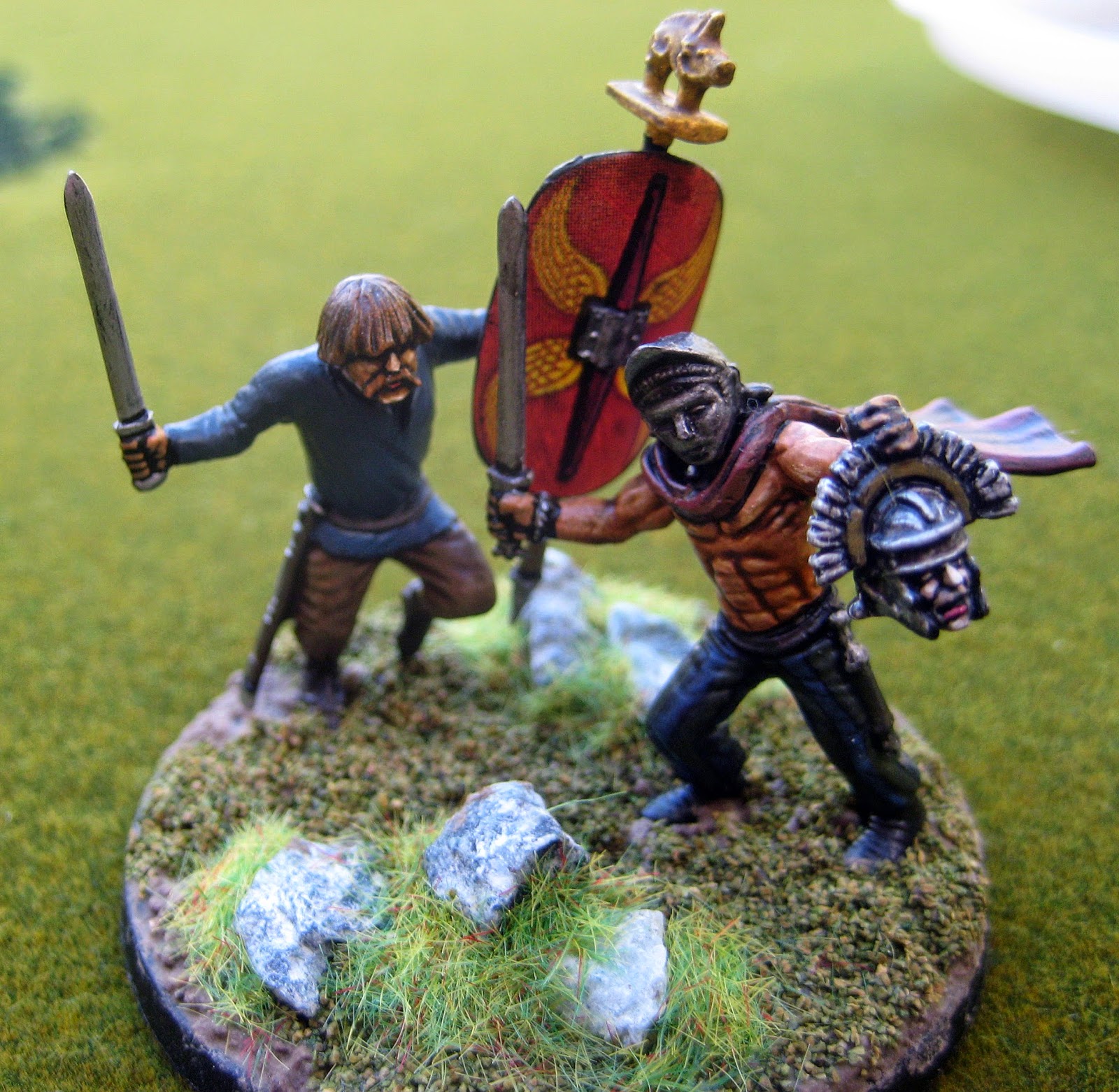 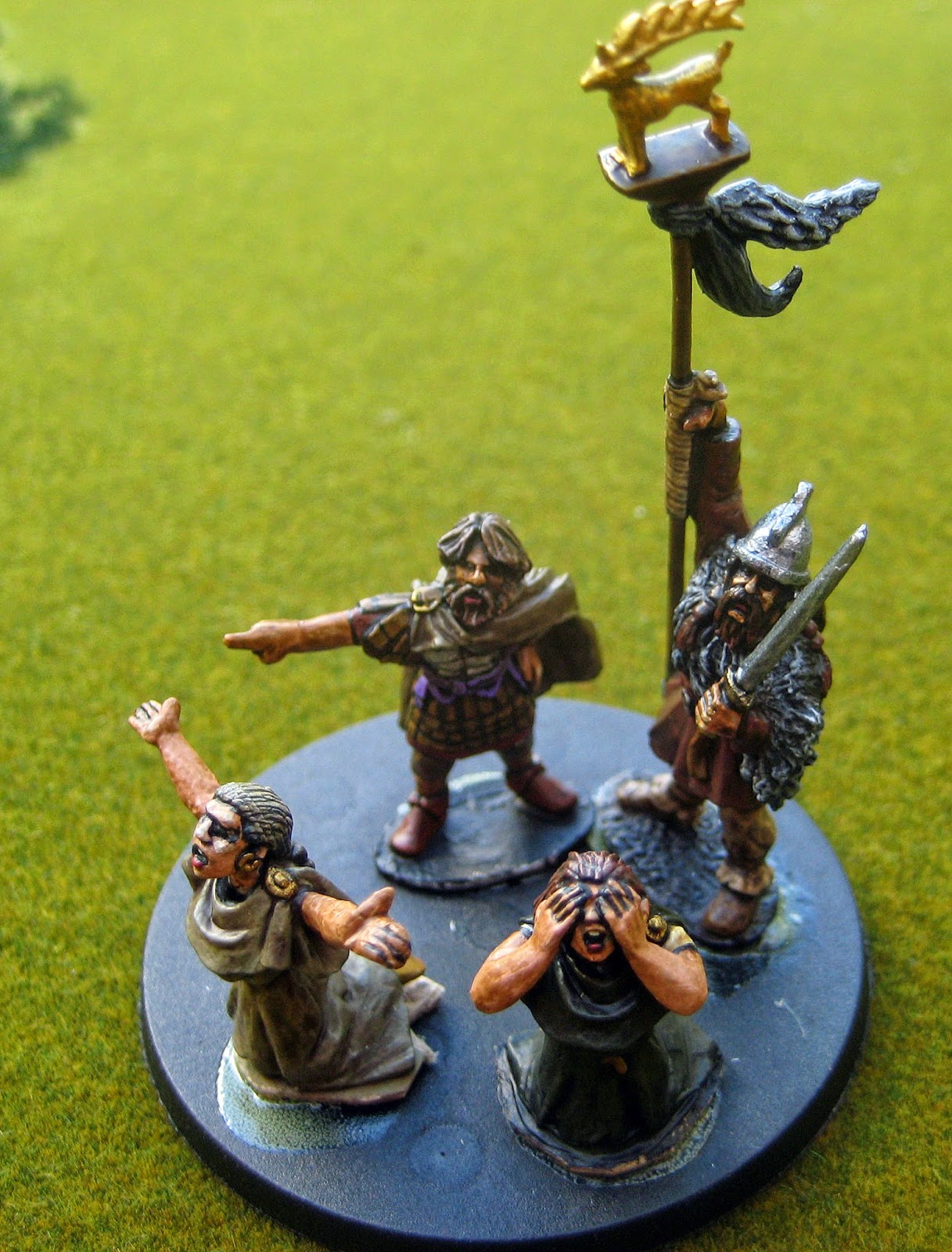 To create Gaius Julius Civilis, I used one of the command figures from Warlord's Early Imperial Roman Officers set. The original figure is helmeted and basically looking the wrong way, so I removed his head and replaced it with one of the metal hairy heads you get in the bag of goodies that come with the Warriors of Germania boxed set. The standard bearer is from Black Tree Design's brilliant Ancient German range, with the original spear removed and replaced with a standard from Warlord's Ancient Celt sprue. 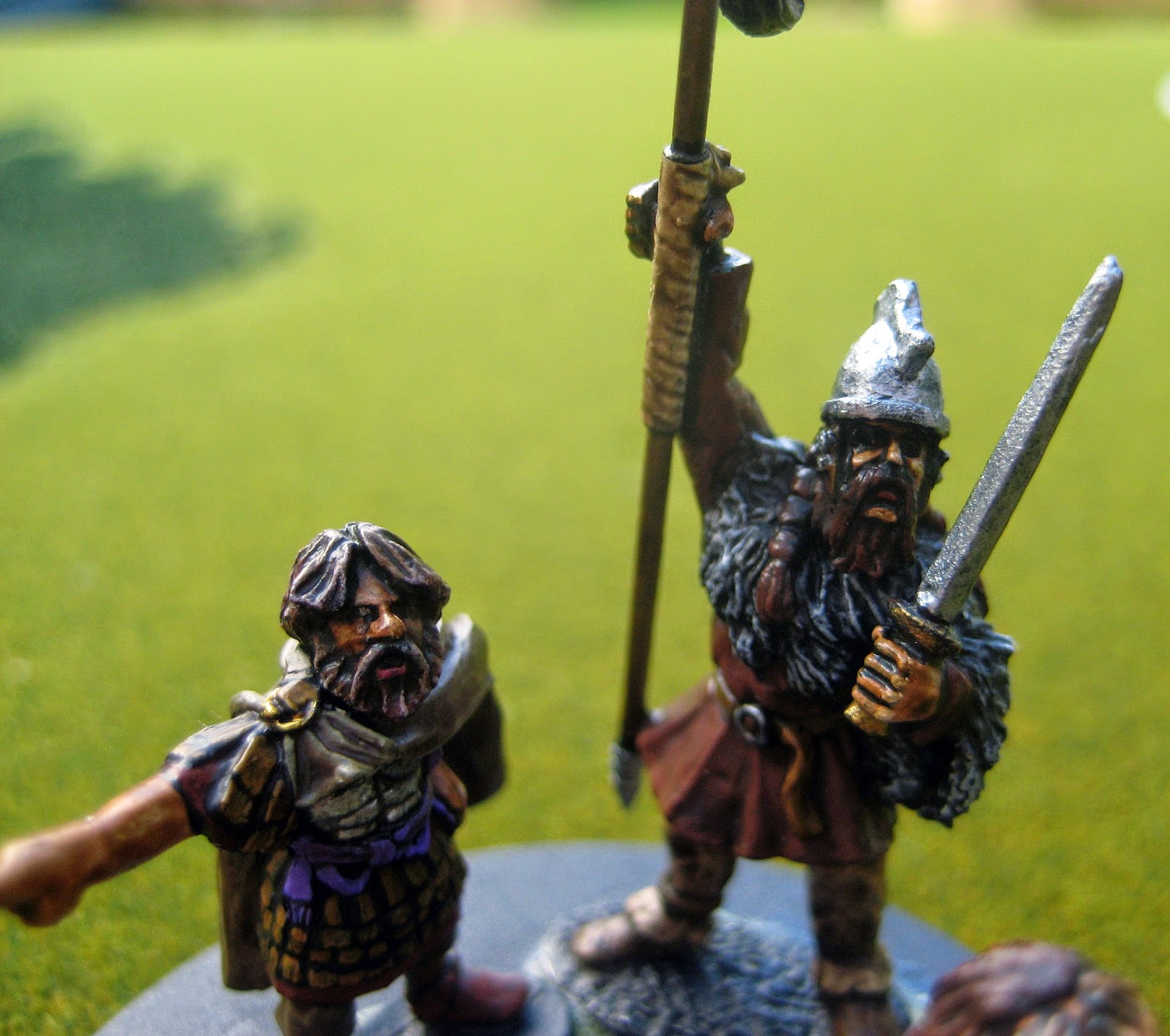 The Black Tree figure is much taller than Civilis and looks like a true tribal warrior hero serving dutifully alongside his warlord!

I read somewhere that Civilis was joined during the revolt by a Priestess of the Bructari tribe, who predicted that the Germans would be victorious over the Romans. The Priestess was called Veleda and was the inspiration behind the wailing ladies on my command stand! The figures are from Wargames Foundry and I am indebted to David from the United States, who contacted me after I put a plea for one of these figures on the TMP website. I didn't want to pay the £12 that Wargames Foundry charge for one of their 'collections', when I only wanted one of the two kneeling ladies. David sent me both of the figures and some other bits and bobs from the collection for a fraction of the cost of buying direct from Foundry. Amazingly, the whole transaction, from posting in the U.S.A. to arrival here in Nottinghamshire took less than a week! 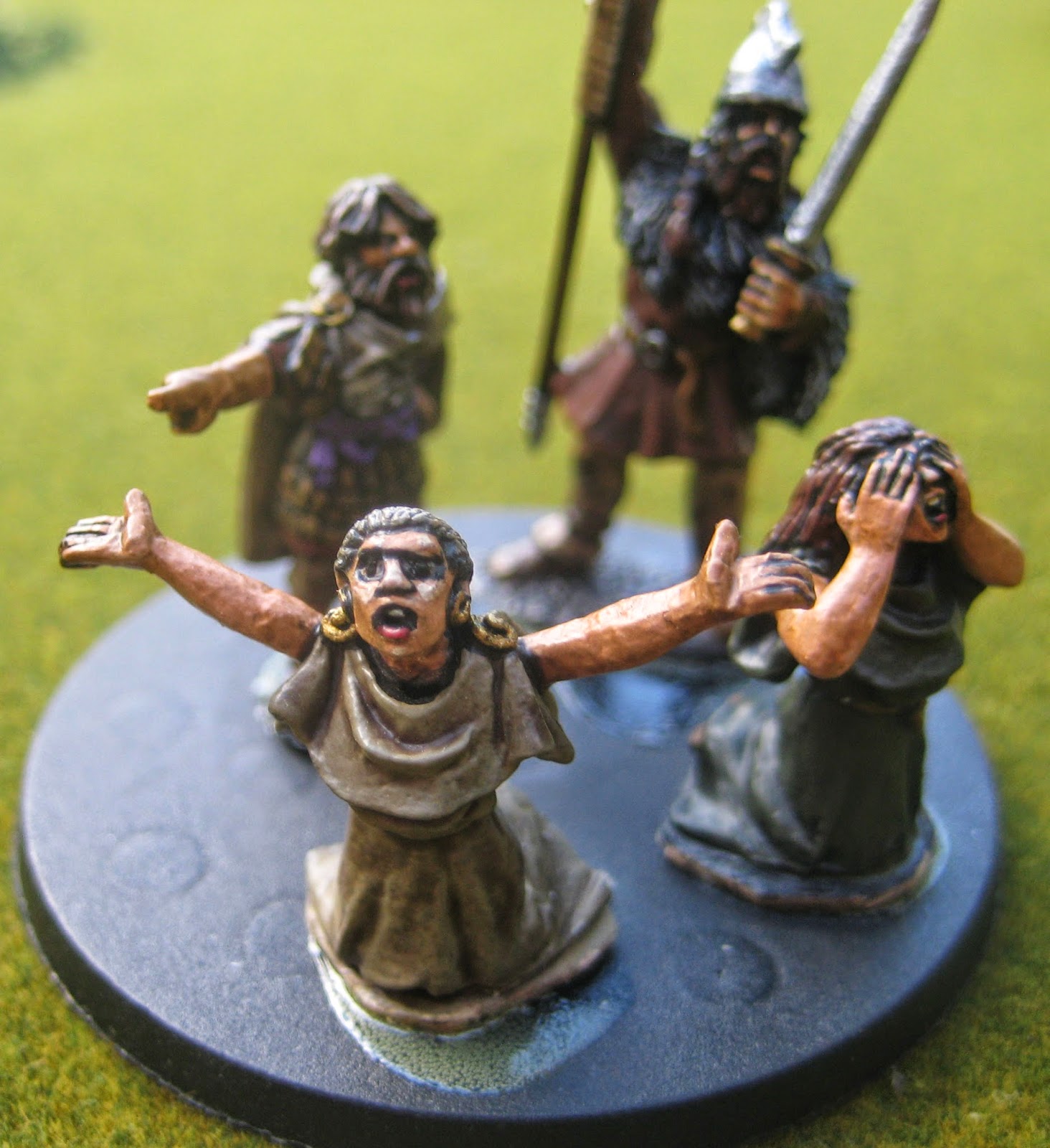 Valeda and one of her sisters are now wailing to invoke the Gods to bring success to the Batavian revolt. All that is left to do is get some basing material on the stand and Civilis will be ready to bring doom and destruction to the Roman Empire!

And as if by magic...   some shots of Civilis and his wailing ladies! 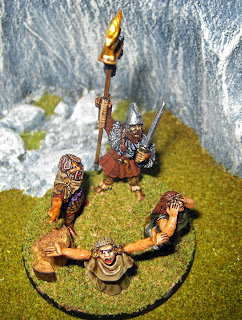 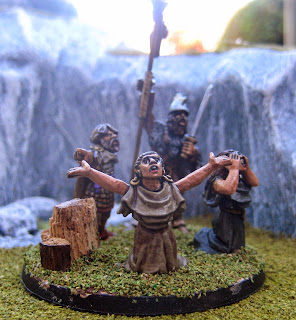 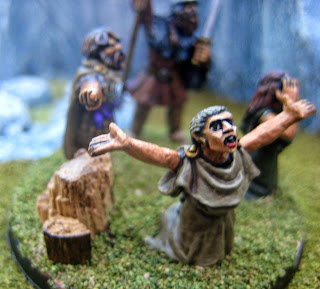 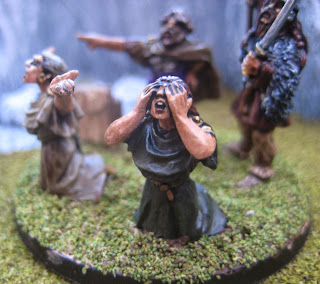 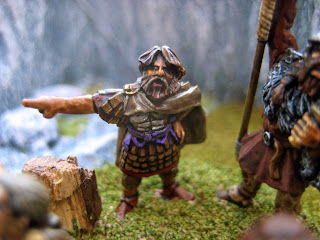 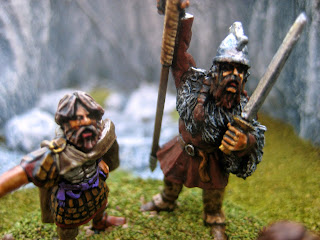