Victrix's war elephant kit is not a cheap purchase, costing as it does, nearly £30, but what you get for your money is nothing less than a classic tabletop masterpiece. There are some pretty basic historical issues with this model if you intend to use it in a Carthaginian army... most authorities on the subject tend to agree that Hannibal's elephants were the relatively small African Forest variety which were incapable of carrying any kind of heavy construction such as a howdah. To get the most out of this kit, you are therefore, going to have to turn a bit of a blind eye to historical reality and invent a convincing story as to how Hannibal could have got his hands on a powerful, howdah topped beast such as this one!

In your self seal bag you get two pairs of sprues, one containing all the bits to make the elephant and the other with loads of stuff to make the crew for the nationality of your choice.

The elephant sprue gives you the option to make two slightly different beasts. The right half is a 'fixed' half, and you can choose which left half you pair it up with. For my first attempt, I chose a left half with its front leg raised. In the pack you get six elephant halves but you can only make two complete elephants, which does seem an inefficient use of plastic to me. Remembering which half is which is important later on in the process of painting your elephant, so try to remember which is which!  There are only one pair of ears and one pair of tusks, but they only fit one way, which is the first point at which remembering right half and left half of said elephant is significant! To complete your elephant, all you need to do is choose a trunk.

At this point, I ought to point out that Victrix have included no instructions with the kit, apart from a list telling you which pieces to use to make each of the different nationalities of crew available in the pack. I recommend trying things out with a dry run or two before you commit yourself to applying your chosen adhesive. I managed to glue the floor of the howdah so that the sides wouldn't fit together properly and had to take it apart and try again; there is nothing to indicate that the howdah floor fits one way but not the other! 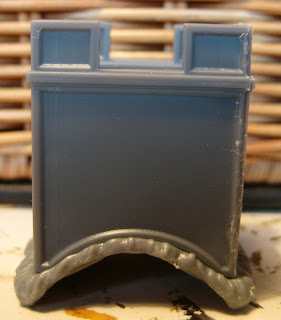 The howdah is fairly straightforward to assemble provided, as I said earlier, that you get the floor the right way round! The howdah fits on top of a cushion which in turn is glued to the back of the elephant. 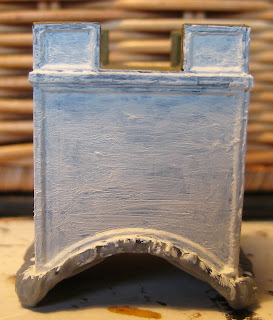 The inside of the howdah was painted with my standard wood colour (Vallejo Green Brown) and then ink washed with brown ink to pick out the detail in the casting. Initially, I painted all of the outside white because LBMS transfers were to be applied here. The transfer set, which is only available from Victrix, is quite expensive at around £10 a go, but they are beautifully created transfers. The howdah has four different transfers to be applied on its large faces and eight more tiny and very fiddly ones which need to be stuck in the small spaces on the howdah's crenellations. I think LBMS have started using a thinner film covering for these transfers which makes removing it much easier; however, don't cut your finger nails just before you apply the transfers! 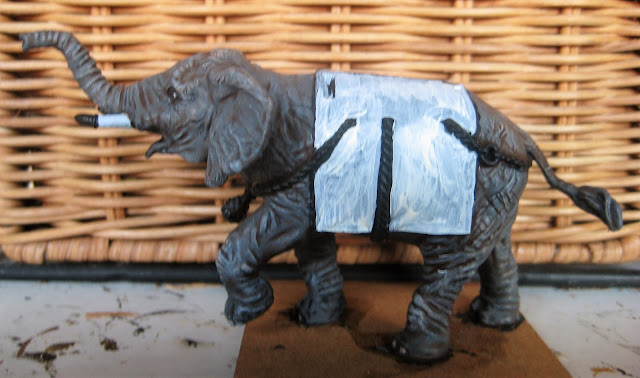 Painting the elephant itself was the bit I initially lost most sleep over! What colour is an elephant? I spent quite a lot of time searching the internet to answer this one and came up with so many different answers that doing so proved to be a useless exercise. The actual answer appears to be that elephants are grey, however, because they spend a lot of time rolling in the dirt to remove parasites and protect themselves from the sun, they take on the hue of the earth where they live. My attempt to replicate the un-replicatable was to block colour the beast in the darkest grey I have and then dry brush with two lighter shades; the last of these being wolf grey, which is a very light shade indeed. I then concocted a pinkish shade of grey-brown and dry brushed this over the forehead, trunk and knees, which hopefully shows where the elephant rubs away the skin to reveal the flesh underneath. The next step was to wash the elephant all over with brown ink, which was intended to show the brown colouration caused by constant mud rolling. 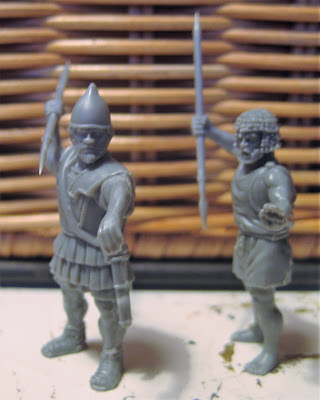 With the huge array of figures available on the sprue, you can crew your elephant with Carthaginians, Numidians, Romans or Ptolemaics. As my elephant was to be part of my Carthaginian army, I decided to add a little variety by using one Carthaginian and one of the Numidians! If you have painted other Victrix infantry, then painting these chaps will be a piece of cake. The only slight difference being that the figures don't have bases as they are to be glued directly to the floor of the howdah 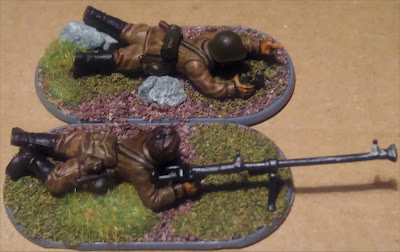