Regiments of the Zulu Army.


This is my first completed regiment of Warlord Games Un-Married Zulu warriors for sale. The unit consists of 24 figures in total, including a slightly modified command figure, which has been given a British rifle to hold aloft to encourage his brave young warriors into the fray. All the warriors are individually based on Games Workshop circular bases and have a mixture of deadly weaponry, including rifles, knobkerries and short stabbing spears. This regiment will shortly appear for auction on e-bay and doesn’t include the movement trays shown in some of the photos.

Click on any of the photos to get a bigger and better view! 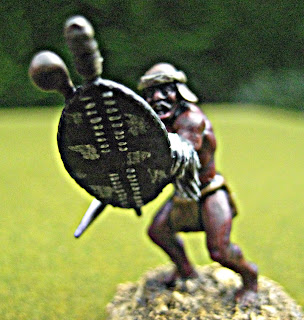 My first completed Zulu regiment is my interpretation of the Mbonambi Ibutho, in 1879, an un-married regiment, originally formed in the time of Shaka, but reformed by King Mpande sometime around 1863 from youths born around 1842. In his Osprey publication, ‘The Zulu War’, Angus McBride shows a warrior of the Mbonambi wearing the headring (isicoco), denoting a man of married status, but I have depicted all my regiment without the headring. The shields are of a regiment of relatively junior status, being mostly black with a scattering of white blotches. 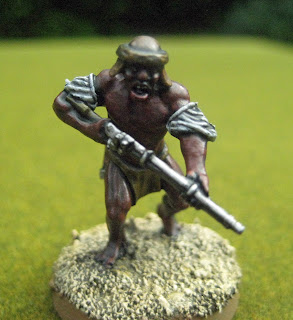 At Isandlwana, the Mbonambi formed part of the left horn, where they faced a withering fire from Durnford’s Sikali horsemen shooting from the cover of a dried up river bed (donga).
When the Sikali ran out of ammunition, the Mbonambi rose and pursued Durnford into the British tent lines. In ‘The Anatomy of the Zulu Army’, Ian Knight suggests that part of the Mbonambi’s head dress may have been granted as a distinction for being the first of the Zulu Impi to breach the British line. 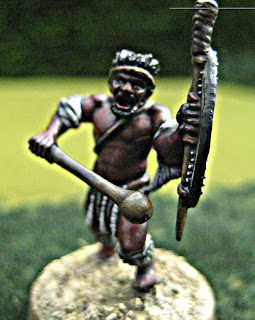 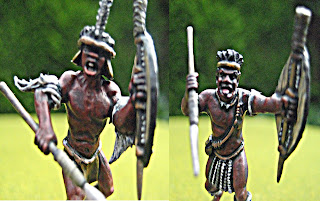 The Mbonambi also fought at the Battle of Kambula, where, this time, they formed part of the right horn with the uNokhenke and the umCijo. The Mbonambi attacked up hill against the main British defensive laager, manned by the 90th Infantry Regiment, and were driven back, suffering severe casualties. In spite of having taken part in two major battles, the Mbonambi were in action again at Gingindlovo, where Somopo hoped to stop Chelmsford and his relief force heading towards the beleaguered Colonel Pearson at Eshowe. 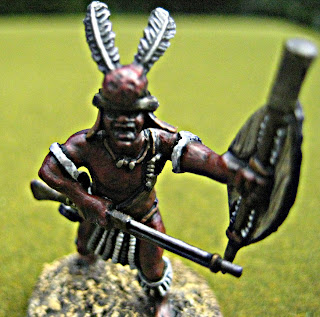 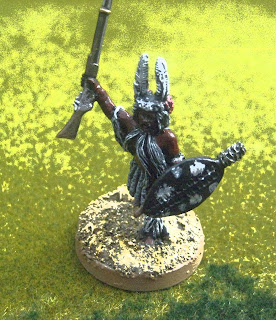 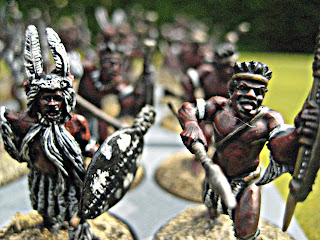