Warfare was endemic along the Scottish border throughout the Middle Ages, which is lucky for me, because it gives me the opportunity to paint up some of the lovely medieval figures currently being marketed by Fireforge Games and Conquest Games Miniatures! 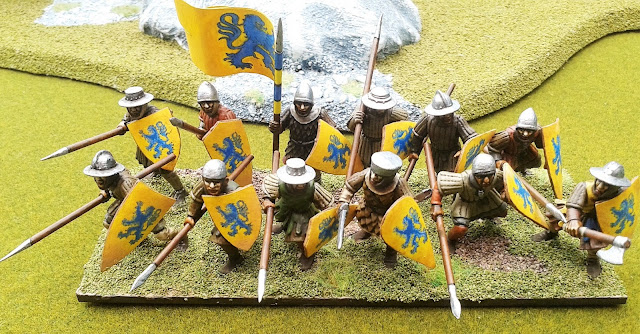 My first attempts, portraying a unit of spearmen belonging to Sir Henry Percy, are just about complete and consists of a dozen figures from the Fireforge foot sergeants set. I have not used any specific command figures, choosing instead to cobble an officer and a standard bearer together from the figures included in the box. The unit is based in a way that could be used for a range of currently available rule sets, although I'm hoping to use them with Sword and Spear, which is full of interesting and innovative mechanisms.

The Fireforge figures are pretty straightforward to construct, although they are a tad confusing to paint, until you've spent some time putting on the colours to see what works where. There are no instructions or guidelines included in the box, so you need to play around to see which bits work best with which other bits! Because I wanted to provide all the figures in the unit with the same shield designs, I had a go at producing my own, using printed paper designs glued onto the plastic shields and given a coat of paint to make them look as though I'd painted the whole thing myself! 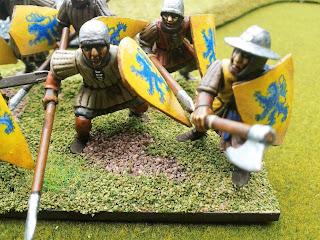 I think Sir Henry adopted the blue lion rampant around 1294, which just about fits in with the timing of the army I'm attempting to create. I'm assuming that, having dropped the old blazon of azure, five fusils in fess or, in favour of the lion rampant, Sir Henry would be keen to show off his new status symbol and thus plastered it on as many shields as possible for his followers to carry! 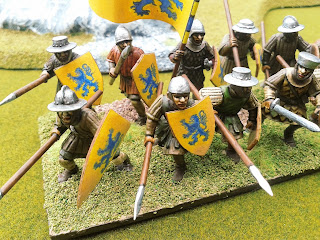 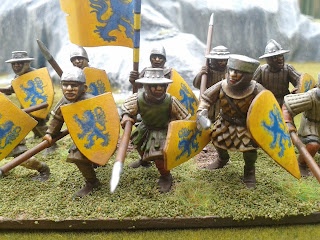 As much as I like the Fireforge spearmen and, of course, you can build them as crossbowmen, which I intend to do for one unit in this army, spearmen only made up a portion of the army's footmen. By the last decade of the 13th century, Edward I was employing ever greater numbers of longbowmen in his armies, which is where the latest release from Conquest Miniatures comes into play. Conquest have developed a very neat box of European archers, which can be put together to make all sorts of Medieval period bowmen. One of the options is to equip the troops with a longbow, an eight figure unit of which will be the next to arrive in support of Sir Henry in his quest to quell the heathen Scots. 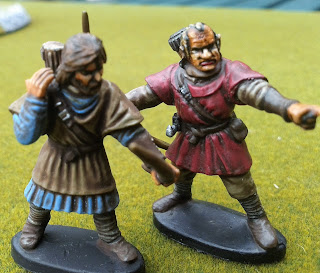 These two handsome chaps are the first of the Conquest longbowmen to roll off the painting bench.