With the long Summer days ahead, thoughts begin to turn to games played outside in the garden; gaming table set up on the patio, long cool iced drinks perched precariously on the table edges, troops basking in the glorious sunshine as they battle their way to glory or ignominious defeat. Well, I seem to remember there was one day last year when the rain stopped long enough to get the shed door open and at least brush the dust off the gaming table before the heavens opened once more!

In the hope that the sun really does shine this year, I recently purchased the Bolt Action Assault on Normandy starter set, with a view to staging some 28mm World War Two skirmish games.

If you buy the starter set from the Warlord Games on-line store, it will set you back £70, but you don't pay postage because of their free postage offer on spends of £50 or more. I side-stepped Warlord and got my set from Wayland Games and it cost a pretty brilliant £54! Wayland's free postage deal is on orders over £40, so I didn't even pay postage on that! If you've not encountered Wayland before, then I would definitely check them out; they have excellent offers and their speed of delivery is second to none. To have a browse round the Wayland shop, CLICK HERE.

So, what do you get in the fancy box for your hard earned cash? Firstly, you get a lovely brand new hard back copy of the Bolt Action rule book. The rules themselves are pretty standard World War II skirmish rules, which are easy to follow, with a couple of gimmicky attributes, which seem to be essential in any modern wargames rules set. The order in which players move their squads is determined by drawing some 'special' orders dice from a bag. Cynics may say the 'special' dice are a good way of making a bit of extra revenue, but I quite like them! You get eight of them in the box, four for your Americans and four for the Germans. The rule book is very glossy, with lots of colour photographs of nicely painted troops and vehicles on the wargames table. There are lots of illustrations to help you get to grips with the rules and a set of four army lists to help you build your 'army'. If you want to be British, American, German or Russian, then you are well catered for, but I fancied having a go at some Japanese and you have to buy a special book for them! Fortunately, if you have any sort of World War II gaming experience, the lists are pretty much redundant; your 'army' is a platoon with a platoon command of a lieutenant and one or two other figures, and two or three squads of five to ten figures or so, commanded by N.C.Os. Because of casualties etc. it doesn't really matter exactly how many figures there are in your squad. All in all, I really like the rules for their simplicity and their being quick and easy to learn.

Apart from the rules, you get 40 hard plastic 28mm Warlord figures, 20 Americans and 20 Germans. As with all hard plastic figures, you are going to have to do a lot of cutting and sticking bits together to get your figures ready for painting. Warlord have had the good sense to include some very useful guides with the figures which show you very clearly what all the bits are. 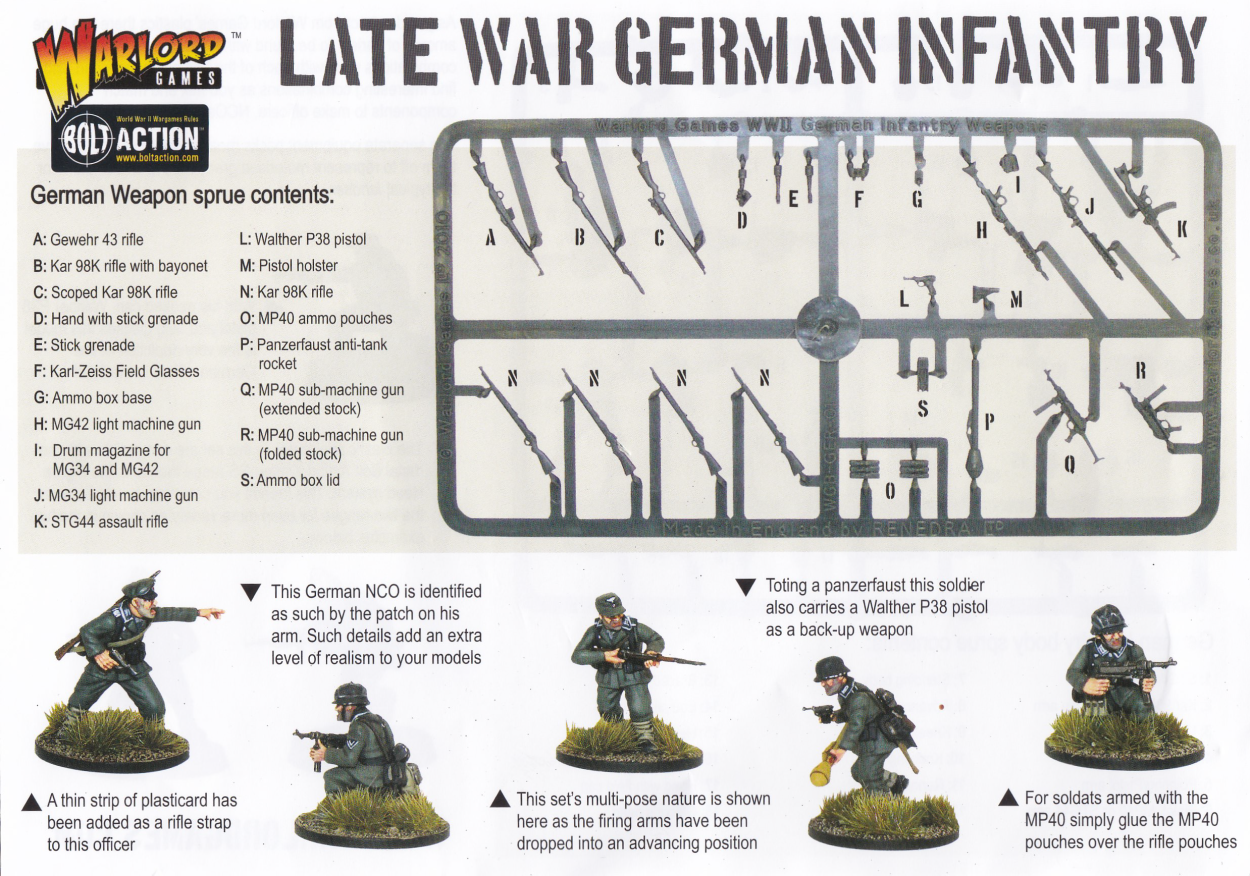 As you can see, there are lots and lots of bits that you can choose to stick or not stick onto your basic figure. The information sheets guide you through all the options and point out pretty vital things like which bits were worn in a particular theatre or period of the war. My main gripe about the figures, is that the bases come separately and you have to attach the figures to them. This can be a recipe for tabletop disaster, when your troops and their bases part company half way through a game. I'd not really thought about this when I painted my first sample group of figures, but since then, I've been drilling holes into legs and bases and using some cut up paperclips to join them together in a more secure manner. 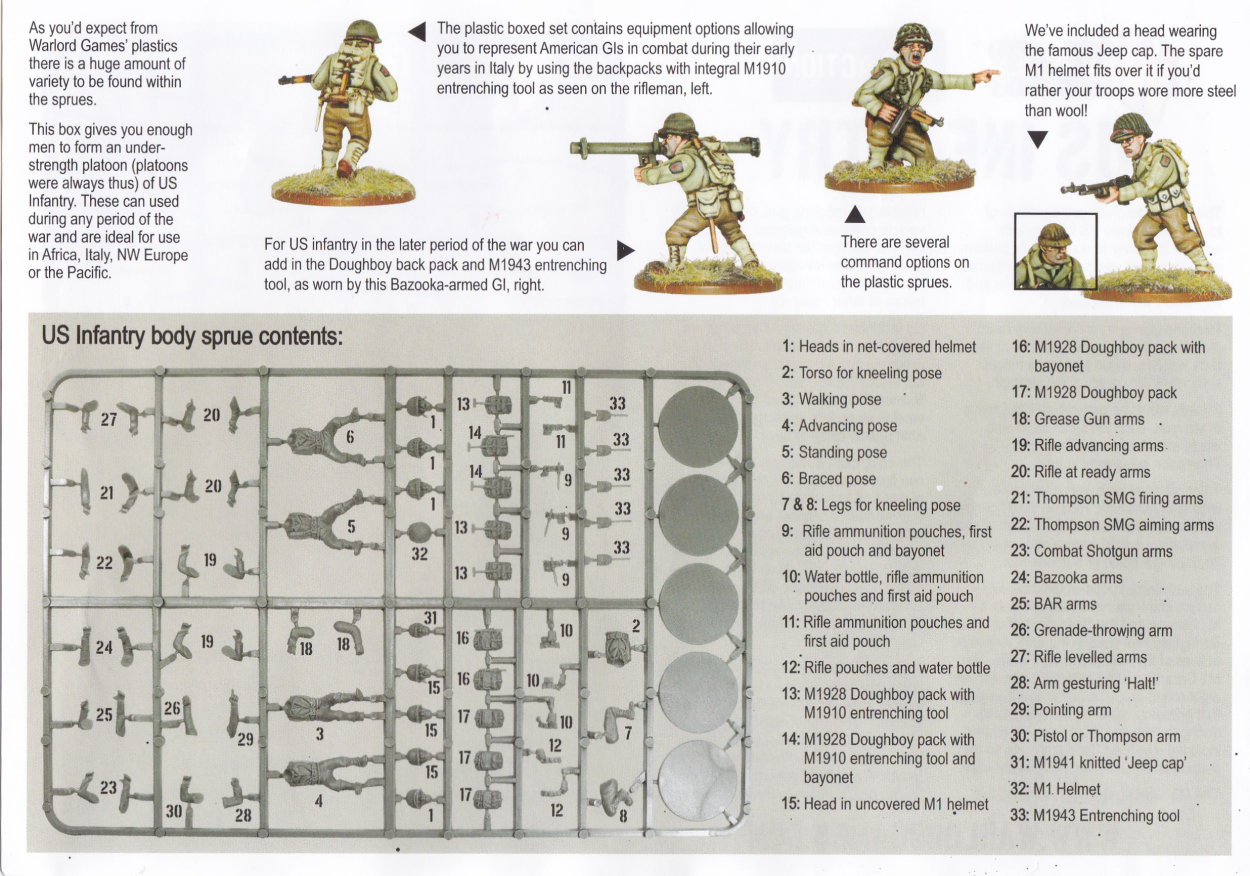 After lots of fiddly sticking and occasional frustrating searching for dropped weapons, heads or entrenching tools, you do get some very nice figures to paint. I started by painting the platoon commands for both sides... 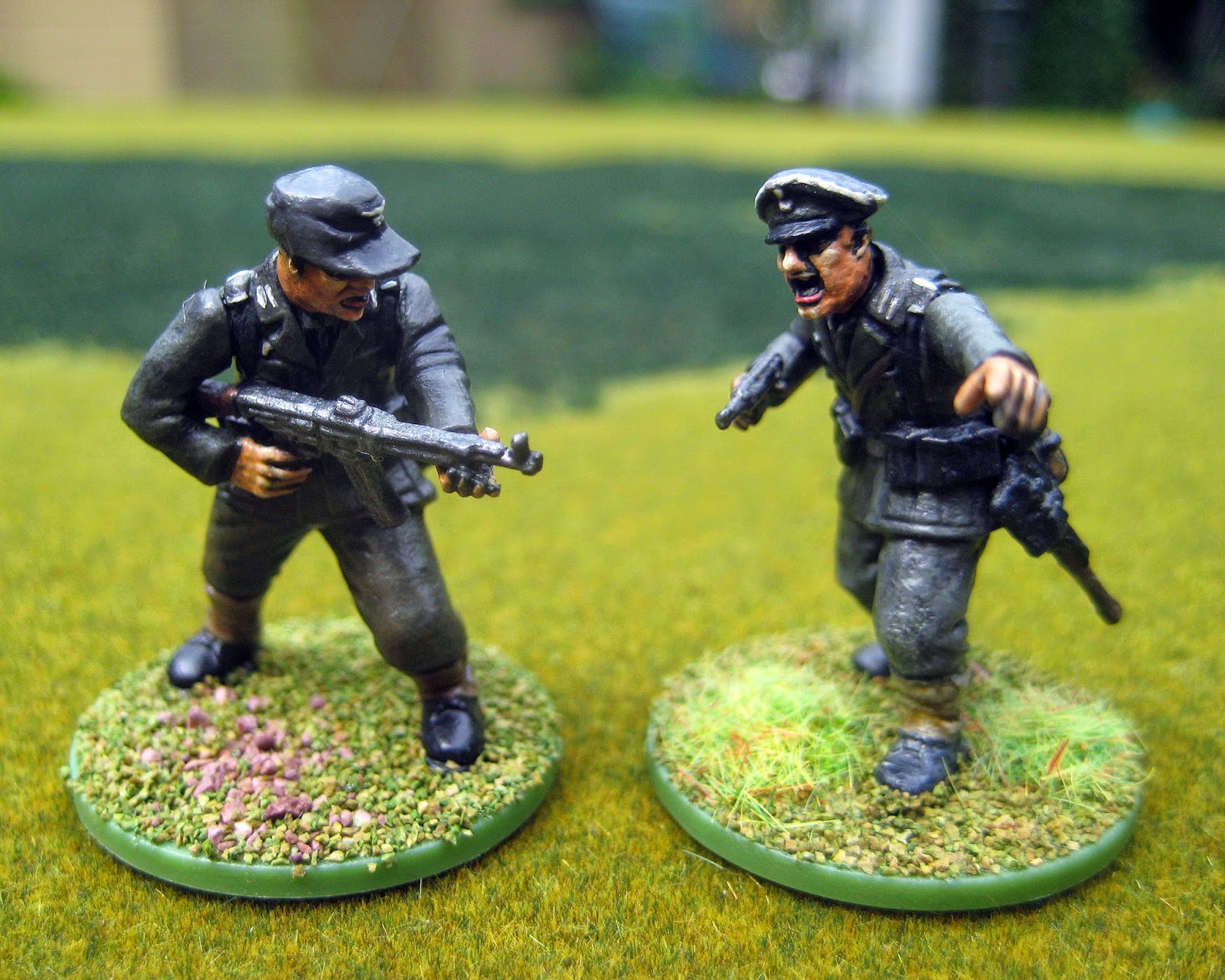 The German platoon command group. The lieutenant armed with a pistol and a pretty loud bark, and his sidekick, wielding a Sturmgewehr '44 assault rifle. 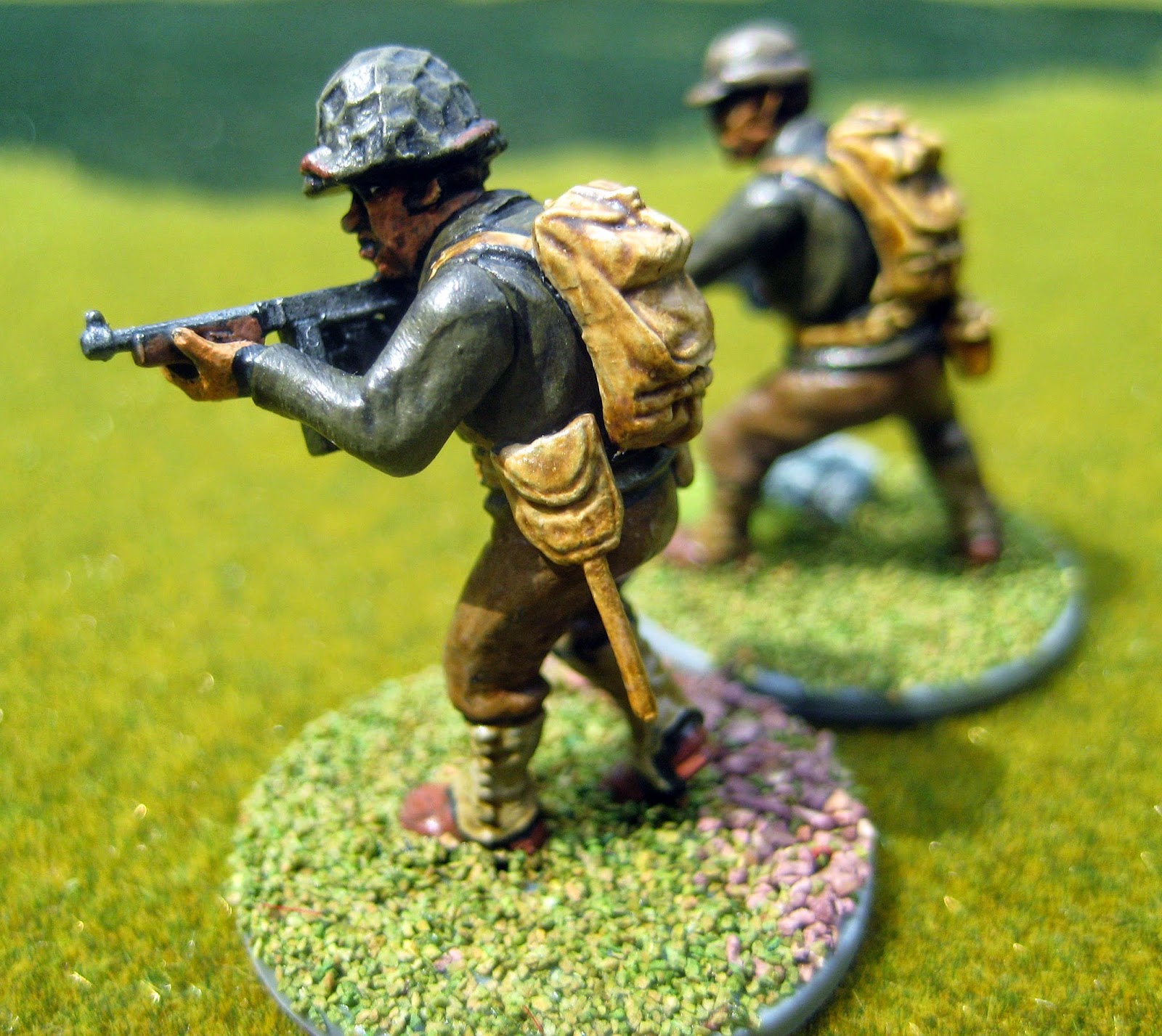 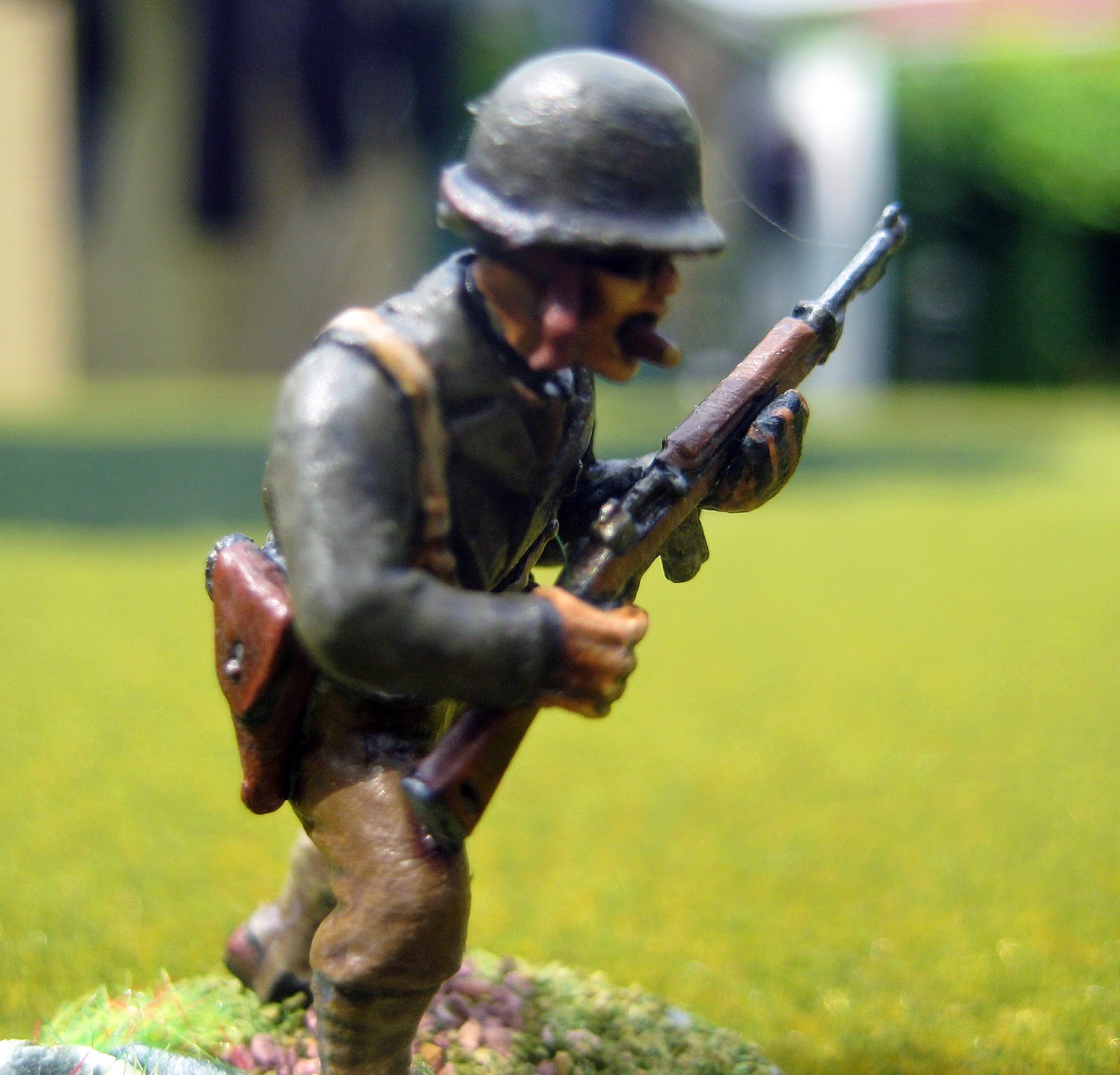 I've never painted a cigar before in thirty years of troop painting! This is my lieutenant, with the two figures above the rest of the platoon command squad, although I think I'll swap figures around quite regularly, once the twenty are all painted up.
The final bit of kit in the box is a ruined farm house model, so you have something to fight over. So far, this still hasn't even come out of the box, so I can't really comment as to the quality, but pictures on the Warlord web site would appear to show a useful bit of terrain when painted up.
All in all, the set was good value for money at £54, particularly when the rule book alone retails for £25, but I'm not sure I would have paid the £70 asking price at Warlord. I'm currently busy painting up the rest of the figures in squad groups, with the plan being to get some skirmishing in during the Summer holidays. That said, I'm still looking longingly at those American marines and Japanese infantry sets. Perhaps if Wayland Games have an offer on I might just make the investment.﻿
Posted by Tabletop General on 07:30:00 No comments:
Newer Posts Older Posts Home
Subscribe to: Posts (Atom)