A Mounted Reserve for my Wars of the Roses Lancastrians.

I'm not really sure why I've spent time and effort painting a mounted reserve for my Lancastrian army. After all, the only occurrence I can think of where a mounted unit played any part in a Wars of the Roses battle was at Bosworth in 1485, and that didn't really end too well for the person who instigated it! I suppose I just like painting horses and there aren't too many opportunities to do so in an army where most nobles dismounted to fight on foot along side the infantry masses. The commander of my Mounted Reserve is Sir John Giles. I can find very little information about Sir John, other than that he was pardoned after the battle. This may indicate that he wasn’t such an ardent Lancastrian supporter as some of the others he lined up with during the campaign. My main reason for making him commander of my mounted reserve was simply that I had designed a standard for him, based on his coat of arms. There is no evidence to suggest that standards had any connection to a coat of arms, but I liked the blue lion and thought it would make a good badge for a standard. The red roses are, of course, a connection with the Lancastrian dynasty and the motto was entirely my concoction, made by running an English phrase through a Latin translator on the internet! I am now beginning to believe that standards carried during the Wars of the Roses were much more transient affairs than I had previously imagined. I suspect that they were often made to be carried for a specific campaign, rather than being permanently stored and brought out every time a new campaign began. 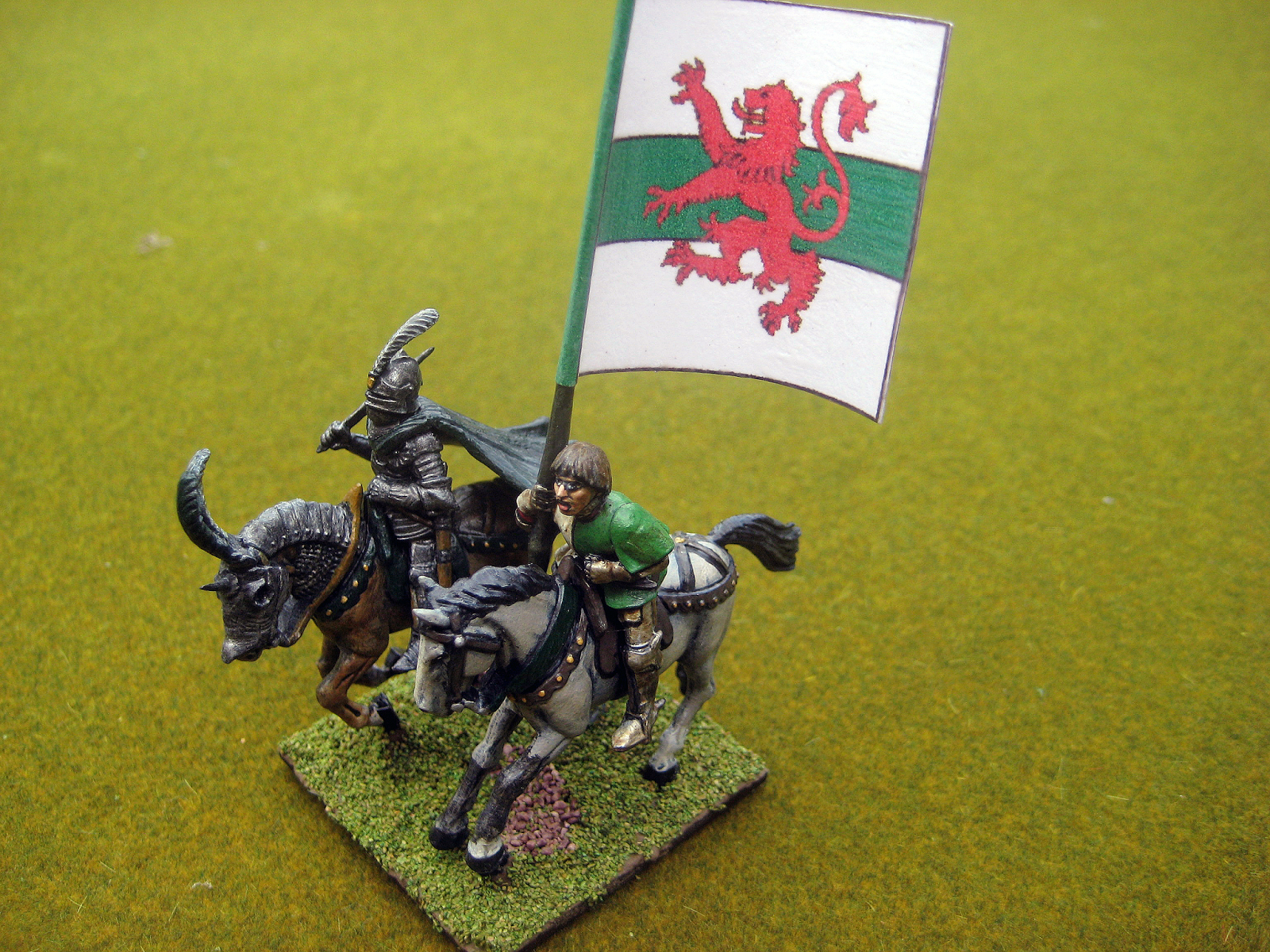 Sir Robert Whittingham was a long-time supporter of the Lancastrian cause. He came from Hertfordshire and was the son of another Sir Robert who was a merchant and financier. He served under the Duke of Bedford in the latter years of the Hundred Years War and became Captain of the city of Caen. Whittingham fought alongside his monarch at the First Battle of St. Albans in 1455, was at Wakefield in 1460 and participated in the great Lancastrian disaster at Towton the following year. When Margaret of Anjou returned to re-claim the throne for her husband in 1471, Sir Robert  once again returned to the Lancastrian cause and, as such a loyal servant to the House of Lancaster, I have given him a place of relative safety in my mounted reserve! The final cog in my mounted contingent is, Sir Gervase Clifton. Sir Gervase came from a Nottinghamshire family who had estates in Clifton (not surprisingly!) and Hodsock, now famous for its snowdrops in the springtime, and which is only about ten miles from where we live! It appears that he served the Lancastrians as Lieutenant of Dover Castle and Captain of Pontoise in France. Prior to the commencement of hostilities, Clifton left the north and settled in Kent, where he held various posts, including Mayor of Canterbury and High Sherriff of the county. During the 1450s, he rose to become Treasurer of the Household to King Henry VI and, when the time came, he nailed his colours firmly to the Lancastrian mast by declaring his support for Queen Margaret in 1471. This commendable act of loyalty to the House of Lancaster, ultimately lead him to face the headsman’s axe after the Battle of Tewkesbury. So, that is my mounted reserve. Only six figures but a lot of fun to build, paint and research the history of the men who make up the ranks. All the figures come from the Perry Miniatures mounted men-at-arms set, which, as usual with Perry plastics, is a wonderful set of figures to work with. The Clifton flag is from a set I bought from Freezywater Flags, but I'm not massively keen on the shiny paper they use; it tends to crack when you form the flag into a 'blowing in the wind' sort of pose. The Giles standard and the Whittingham flag are home made, using a combination of Serif's Page Plus and Photo Shop, as described elsewhere on this blog. Lets us pray that the God of Battles ensures great victories for the Lancastrian cause and the nice shiny armour of my mounted knights is never tested on the field of battle!
Posted by Tabletop General on 07:57:00 No comments:
Newer Posts Older Posts Home
Subscribe to: Posts (Atom)