Infamy! Infamy! They've all got it in for my hard earned cash!

The midsummer madness continues to play out its crazy machinations with the arrival of the Too Fat Lardies' latest creation, Infamy! Infamy! Somehow, I had completely missed this one, in spite of regular visits to the Lardies web site in search of information and assistance with Chain of Command. When I did become aware of it, just the mention of Germanic armies and the year 69AD lead to yet another raid on the PayPal account to get a copy of the rules but, this time, I already had plenty of lead and plastic ready to start building a warband. 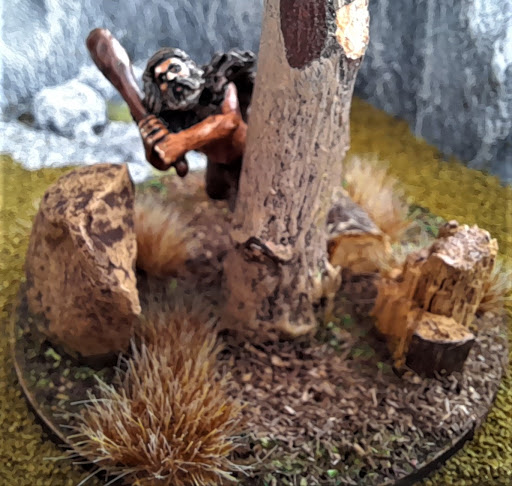 It seems like ages ago now that I bought my box of "Warriors of Germania" from Warlord and failed to be particularly impressed by their re-hashing of their Celtic figures, but I dug those out of their isolation and, with the bag of Victrix Germans that I'd bought when they first arrived on the market, I had the basics of a Barbarian warband for Infamy! Infamy! 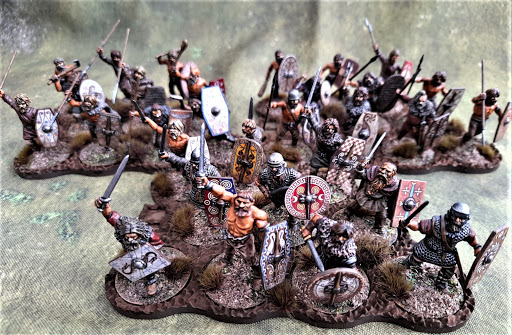 I love the idea of Barbarian infantry operating in "Mobs". The Mob above comprises three groups of ten Germanic warriors; the group in front being Oathsworn Warriors, who are the Warlord's personal retinue. I think my initial target will be a warband from Germania Magna, which is the smallest of the options in the army lists, requiring just another ten man warrior group to go with the thirty figures already done. I have a group of six Fanatical Warriors painted, based and ready to go and a group of six Tribal Slingers almost completed. 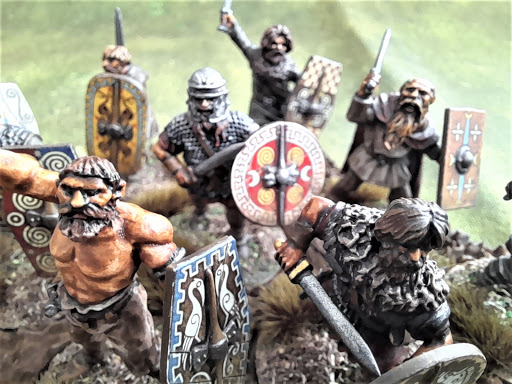 The Oathsworn Warriors are a mixture of Victrix, Foundry and, no longer available, Black Tree Design figures. I am a little disappointed with the Victrix set; they are just not furry enough for me! The character on the right is a Victrix figure in captured Legionary armour but I've given him a Green Stuff fur cloak to Barbarianise him. The Victrix heads are excellent and look really good when the mop of hair blends into a nice furry cloak.

The ordinary warriors are again a mix of different manufacturers' figures, mostly Victrix, with added fur for some, and the Black Tree and Warlord figures pressed back into service from my earlier Year of the Four Emperors project.

So, still a lot of work to do to arrive at the point of having an Infamy! army ready for the table top... Not surprisingly, this Lardies rule set requires a lot more than just groups of fighting figures; the Warlord Games figure peering around the tree at the top of the page is the first of six "Ambush" markers that need to be built, I have a load of Foundry Germanic women to paint as a "Wailing Women" rallying point, the Warlord and his subordinates need painting and I have some Foundry archers to paint as Woodsmen missile men. Beyond all of this, of course, will be a bag of Victrix Roman Auxiliaries, which can undergo plenty of modification, particularly with those wonderful Victrix heads, to become the revolting Batavian Auxiliaries of my favourite year in the entire history of the Roman Empire... The Year of the Four Emperors! 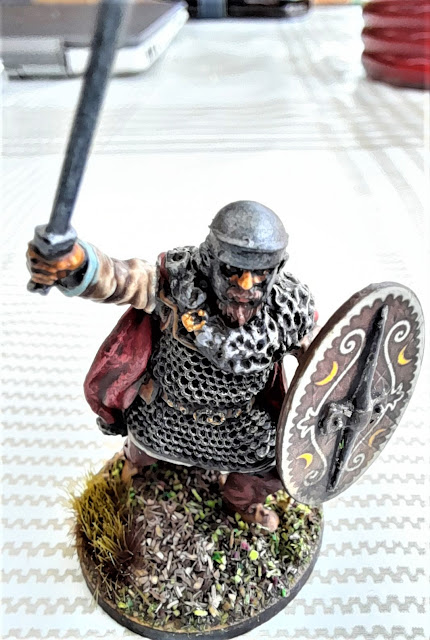 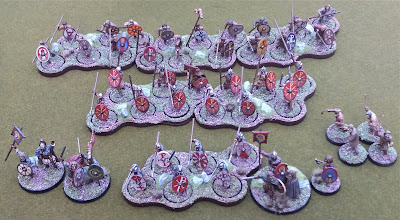