Characters are a key feature of games using Clash of Spears, they are the ones who enable your fighting units to activate and perform their acts of heroism, or react to events unfolding around them. Obviously, even the greatest commanders have a limit to the influence they can have over developments on the battlefield, so, in Clash, characters are each assigned a number of Command Points which they can use each turn during the game. Under these circumstances, it is important to have some kind of tracker to record how many Command Points have been expended by each character. Dice are a simple way to track CP expenditure, but I was looking for something a little more aesthetically pleasing and I'm also using dice to record the number of fatigue points a unit has accumulated. With this mind, I had a browse on the Warbases website to see if they had anything useful which might be employed for the task. Under their "Gaming Aids" section, Warbases produce a casualty marker with a centre turning dial which can be customised with any text that you want. Without further adieu I ordered a set of the markers with "Command Points" as my chosen text and set about building some standard bearer figures to stand on the middle of the markers to identify which army they belonged to. 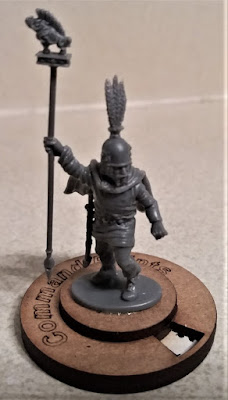 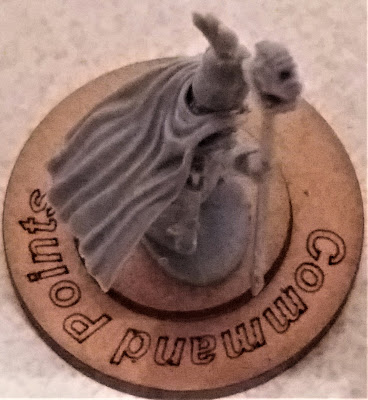 Putting basing flock on the figure requires a bit of care, as you need to ensure that it all stays on the small circular base on top of the marker and you might need to clear small bits of basing material from the slot which shows the number dial. 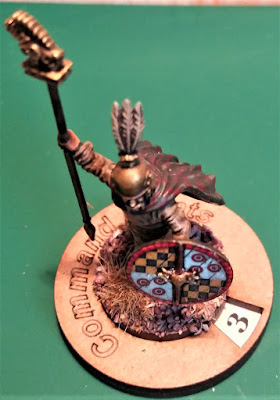 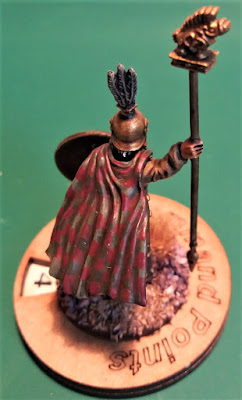 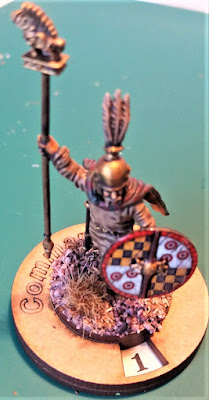 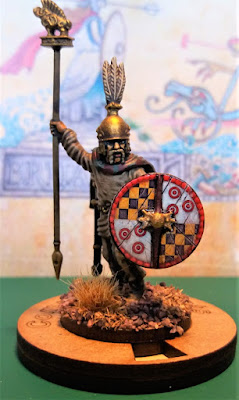 Apart from the practical application, I think using the standard bearer in this role makes an aesthetically pleasing addition to the table top, compared to using yet another die to mark a character's current Command Point total. Clearly, it is somewhat more time consuming, especially if you have a number of characters to make CP indicators for. Next job is to paint up a Carthaginian standard bearer for that army and then we're ready to rumble with some Clash of Spears table top action.