It is the third day of November, in the year of Our Lord, 1173, the holy day of Saint Winifred, the patron saint of unwanted advances! With the onset of the Winter season, Donnchad, Earl of Fife, is leading his retinue towards the village of Stokley, intent on destroying all supplies which may be used by his English adversaries during the harsh and desolate season to come.
Earl Donnchad stood upon the back of his lowly page and addressed his troops thusly, with words spoken from his very own mouth, "My true and loyal retinue, wars are not only won by sword and spear. Upon this day of Saint Winifred, we will strike a brutal blow against our foes by denying them the sustenance they require over the coming season of dearth. Let us march boldly to yonder village and burn and plunder all that we find therein and leave the despicable English not one sausage nor the mustard to spread upon it!"*
* Some historical sources have attributed this reference to a later personage, but this is utter rot and Donnchad is most definitely the originator of the quote.
Unbeknownst to Donnchad, Ranulf de Glanville, commander of King Henry's forces in the North is also advancing on Stokley, having been informed, by miserable peasants fleeing the village, of the approach of the Scottishmen. And low, by the cruel and malign workings of the Gods of War, is the Battle of Saint Winifred's Day about to begin!

The Sacrificial Lambs! A unit of English heavy infantry spearmen deployed to fend off the Scots, hopefully, until the rest of Sir Ranulf's retinue arrives.

Brother Stultus and Eadwig the Parsnip Pickler, left to guard the Bishop of Durham's supply of freshly imported Bordeaux and garlic. If the Scots manage to get their hands on the cart, they will have to test to determine whether they follow orders and destroy the Bishop's goodies or find another use for that fine vintage red wine.

No time for the defenders to contemplate their fate... the fearsome Galwegians hurl themselves against the spearmen, fortunately, the Englishmen have had the good sense to organise themselves into a wall of spears formation and the "naked" Scots come off second best!

Brother Stultus breathes a sigh of relief, as Sir Ranulf and his brave and fearless knights arrive to support the spearmen.

It takes more than a few hideous spear wounds to deflect the Galwegians from their onslaught and they renew their attack upon the spearmen. However, their lack of armour proves to be their downfall and four more of their number bite the dust.

Even as the Galwegians fall back, battered by the shock of the conflict, their fearsome assault is enough to force the spearmen to fall back, leaving Brother Stultus and his parsnip pickling companion somewhat exposed!

With better targets to aim for, Sir Ranulf and his trusty band just cannot resist the temptation of charging into the Scottish bidowers, who have begun to contaminate the village well in their own unique way. The outcome is a forgone conclusion, and the Scots are trampled under the hooves of the English knights.

The Scottish knights charge headlong towards Sir Ranulf, but the English somehow manage to organise themselves to make a counter charge and gain the upper hand in this first clash of mounted chivalry. 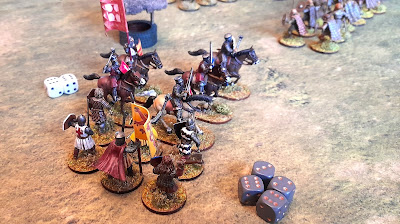 Seeing his mounted brethren pushed back, the Earl and his household men take the opportunity to launch an assault upon the English knights and compel Sir Ranulf to fall back.

The knightly melee continues with the Earl inflicting yet more casualties upon the flower of English chivalry.

Over by the pigsty, the Scottish Yeomen charge into the English spearmen, hoping to use their superior numbers to force them back, however, the sturdy Englishmen continue to defend the Bishop's wine supply with matchless bravery.

Then, against all the odds, having seen off the dreaded Galwegians, the English spearmen's courage falters and they break and flee the field of battle.

On this day of frightful slaughter, the Scots have no time to recover before Sir William de Stuteville and his foot knights launch an attack upon them, causing many more casualties.

Having pushed the Scottish spearmen back, Sir William and his valiant band find themselves struck by the mounted Scottish knights and yet more noble blood is shed in defence of the Bishop's wine.

Sir William and his battered knights fall back alongside Sir Ranulf and things are beginning to look bleak for the English.

With fresh English spearmen advancing to protect the grain store, Donnchad and his knights take the decision to risk all and charge into the mass of English spears and both sides suffer casualties.

In spite of their heroic attempt to drive off the Scottish knights, the luck of the Gods turns against them; their courage falters and the English spearmen fall back battered and bruised.

Unable to resist, Sir Ranulf and his trusty banner bearer make a wild charge into the remaining Scottish mounted knights. The outcome is inevitable, outnumbered, the courageous English knights are driven from the field and the morale of the retinue is tested but not broken.

In the final act of this slaughter on Saint Winifred's day, the courage of the mounted Scottish knights is finally broken by the doughty resilience of Sir William and his remaining men-at-arms and, with so little left with which to continue the fight, Earl Donnchad orders the remnants of his retinue to quit the field, leaving the village and its bounty in the hands of the English. 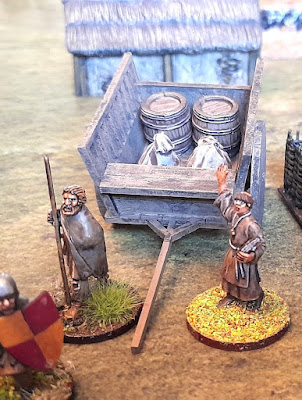 Brother Stultus and Eadwig have survived to tell the tale and who knows what rewards will be heaped upon them by a grateful Bishop!
Posted by Tabletop General on 13:04:00
Retford, United Kingdom Retford DN22, UK