LION RAMPANT... A WEE SCUFFLE ON THE BORDER! 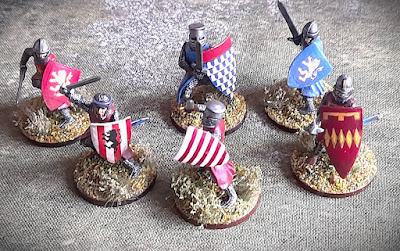 With the Second Edition of Lion Rampant due out next week, I thought it was about time I had a game with the First Edition. I'm currently working on a Scottish retinue for the period of Henry II's Civil War of 1174 and have three units completed and ready for battle. With King Henry embroiled in a war against his wife and sons, King William the Lion of Scotland inevitably saw an opportunity to press his claims to sovereignty of Northumberland, Cumberland and any other bits of northern England he could get his hands on. King William managed to get himself captured at Alnwick in 1174, so I decided to completely ignore him and build my retinue around one of his commanders, Donnchad, Earl of Fife instead. 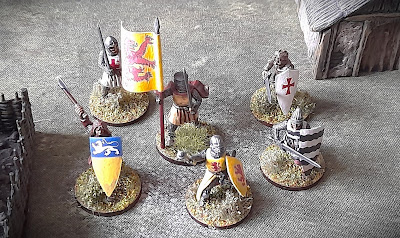 With only three Scottish units to choose from, building Fife's retinue didn't take much thinking about.

The Earl and his men-at-arms took up position on the right of the Scottish line, with the Bidowers on the opposite flank. In the middle, with a ploughed, stone walled, field for cover, was a unit of Lowland Spearmen (Foot Serjeants), who advanced quickly to take up a defensive position facing their English counterparts. I don't think I would have done anything differently but, had I read the rules a bit more thoroughly, I would have realised that the Serjeants wouldn't be able to form 'Schiltron' in the rough terrain of the ploughed field! However, even without the ability to form 'Schiltron', the Serjeants would have their Armour Value increased by 1 for defending the stone wall.

I gave the English three units to face the Scots, although they did have a greater points value than their opponents. On the left of the English line, facing the Earl, was a unit of Mixed Weapon Yeomen; equipping Yeomen in this way, gives them the option of using bows to hit an opponent from a distance, but increases their cost by an extra two points and prevents them from using the 'Schiltron' formation. Along side the Yeomen was Sir William de Stuteville and his loyal Men-at-Arms.

The Yeomen and their bows proved to be a real nuisance, causing casualties in the ranks of the Scottish Men-at-Arms and then the Lowland Spearmen. 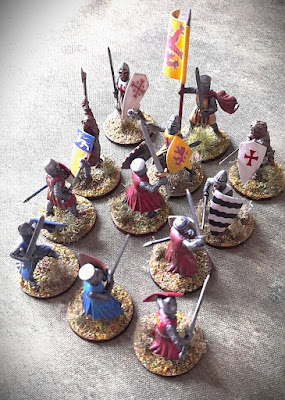 The opposing Men-at-Arms clashed early on in the encounter, with the Earl charging into Sir William's men who, being dismounted, were unable to counter the charge. 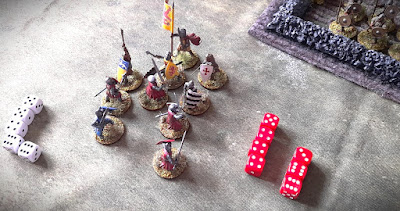 Both sides scored enough hits to remove one casualty, although the charging Scots almost had enough hits to take a second English knight out of the action. From this point onwards, the Scottish Men-at-Arms were pushed back and came under fire from the English Yeomen.

It took a while for the English Serjeants to get going, but they began a steady advance on the Scots defending the walled field.

By the time the Serjeants clashed over the wall, the English had taken casualties from the Scottish Bidowers on their right but, even though they made two attempts to dislodge the Scots, they were pushed back with mounting casualties. Eventually, the English Serjeants were forced to switch their attack towards the Bidowers... a move which was to cost them, and the English Retinue, dearly, as the Bidowers gradually inflicted so many casualties that the spearmen broke and fled! 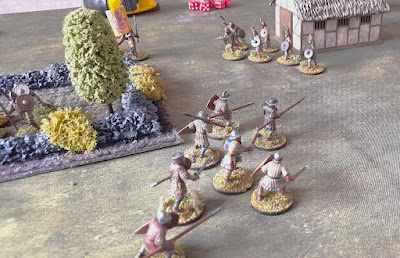 With the loss of his Serjeants, Sir William decided that it was time to concede the field to his opponent and return to the fight another day.
This was only a very small encounter, which took about an hour and a half to fight, but it has left me keen and eager to get the rest of my Scots painted and get some more Lion Rampant battles fought. I played the rules to the letter and experienced the horror of failing an Activation and having that turn's plans dashed to pieces! The 3" separation rule will be very difficult to maintain on my small table, so I'm already thinking of a plan to get a bigger playing surface for future battles. All in all, I have to say that Lion Rampant is going to be at the forefront of my gaming for some time to come; it's easy to learn the basic rules (I did need to refer to the book on a couple of occasions) and I really enjoyed the way the Activation system makes you think about the order in which you attempt to do things or, what is going to befall your forces when that Activation roll fails!
It's going to be a little while before the rest of my Scots are ready, but I can't wait to get the Earl of Fife and Sir William back on the table top for more Lion Rampant with the 2nd edition of the rules.