Back in 2020, during the endless months of Lockdown, I spent a lot of my enforced leisure time painting up troops for the Too Fat Lardies' rule set, Dux Britanniarum. Arthurian or Romano-British armies have always held a deep fascination and the arrival of Wargames Atlantic's box of Irish warriors re-kindled the passion for the period. I had already painted a Romano-British warband and I intended to set up an entire campaign raging across northern Britain, once the Lockdown was a thing of the past. However! With the situation dragging on interminably,  and the arrival of Clash of Spears, with games that I could play solo on the dining room table, the two warbands I had painted ended up in boxes on the painting shed shelf... until now!
I'm not sure where the inspiration came from, but it suddenly dawned on me that the figures I'd painted for Dux Britanniarum, would work perfectly with Clash of Spears. Warfare in the Age of Arthur was all about small warbands roaming the land and fighting battles that were in effect nothing more than small scale skirmishes. All I needed to do was work out the stats for each of the troop types, get the figures on the dining room table and get Alexa playing the soundtrack from Monty Python and the Holy Grail... what could be simpler than that?
Primum: deciding on those all important stats! I've played quite a lot of Clash of Spears now, but all my warbands have been built using the brilliant on-line warband builder, Clashculator. There are some beta lists on Clashculator for the "Dark Ages", but they are primarily aimed at a later date than my Arthurian age forces. I managed to link some of the stats from the Irish list where they fit with my idea of an early 6th centuryish warband, but, to be honest, I can't say that I feel particularly confident with the numbers I came up with. 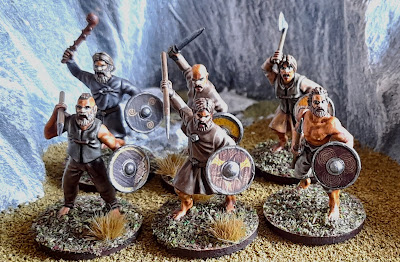 The core of the Irish raiding warband are the Warrior Raiders. The figures I originally painted for Dux Britanniarum had a mixture of weapons, which is something I've avoided with my other Clash of Spears forces, but I decided to keep the mix, having initially intended to remove the axes, swords and shillelaghs, because these guys pepper the opposition with javelins and then charge in with a vicious and deadly all out attack. Fortuitously, "Vicious" is a trait which appears in the Rise of Eagles supplement and fits perfectly with how I see Irish raiders fighting. To quote Rise of Eagles, "These warriors are especially violent and bloodthirsty, they normally use hacking weapons and single bladed swords that they wield savagely to inflict terrible wounds mercilessly."
The profile I arrived at for the Warrior Raiders was this:

Continuing with the infantry, my warband has 2 units of Javelinmen, who are similar to the Warriors, but have no shield and are not intended to get involved in hand to hand combat! 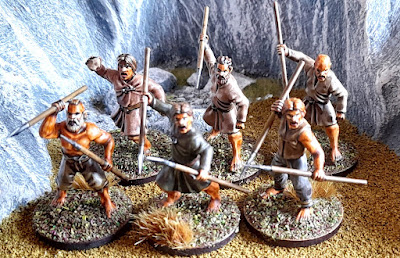 Like the Warriors, I've kept these guys exactly as I painted them for Dux Britanniarum, but I needed to make an extra four figures from the left overs in the Wargames Atlantic box to have enough for the two units.  The profile for these more combat shy Irishmen was based on the standard Javelin profile that appears in just about every army list throughout Clash of Spears...

Last of the infantry, are a unit of 6 sling armed skirmishers. In Dux Britanniarum, this unit requires only 4 figures so an extra painting session was needed to add the extra troops.

The final two units of the warband are mounted raiders; one a light cavalry skirmishing unit and the other a group of heavier melee cavalry, probably made up of minor nobility. Dux Britanniarum requires these units to be four figures strong and I did ponder briefly on the idea of adding another couple of figures to each for Clash of Spears. Two reasons stopped me from going down that road, firstly, cavalry was pretty scarce at the time, so having smaller units seemed to be more period appropriate and, secondly, there are no cavalry figures in the Wargames Atlantic box, so I had to buy them from Footsore Miniatures and they are relatively expensive! Logic and smart financial management prevailed and I decided to keep these two units to four figures each, with the qualification that, if the gas and electric bills don't turn to be quite as bad as predicted, I could always send in another order to Footsore and bulk out these units to the tune of another couple of figures each. 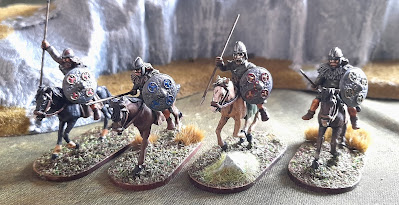 Fianna was the best title I could come up with for this unit. It seems to have been around since well into antiquity as a title meaning something like "elite warriors" or "bodyguard" or something suggesting higher quality status. It is used in the Clashculator beta list for the Irish, so I think it is probably appropriate for this unit of partially armoured melee troops. As it stands, I have chosen "Furor" rather than "Vicious" as a trait, simply because it sounds more noble!
So, that is my Irish Warband for Clash of Spears as it stands. I would really appreciate any thoughts or feedback from anybody really, but particularly people who play Clash. Post Roman Britain is my favourite historical period and Clash of Spears is my favourite set of rules, so I really can't wait to put the two together on the dining room table, but, I'd like to get the right feel to the game, and the right stats and the right traits are what will make that happen.
Next up will be my Romano-British warband...
Posted by Tabletop General on 12:36:00