A Bit of a Scuffle Outside the Pie Shop.

Pinch Punch… 1st of a new month, so I set up another small trial game of Knighte, Pyke & Sworde this morning. This time, I decided to try out an alternative Activation method, using cards rather than the single die roll as written in the rules; playing solo, I thought a card driven Activation system would work better and it adds more tension to the game.

The scenario involves a bit of a scuffle outside Mistress Miggin’s Pie Shop. 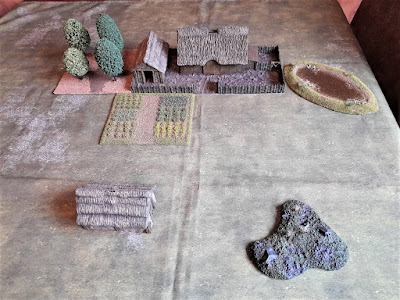 The locals are prepared to queue for some time to get their hands on one of Mistress Miggin’s choice hot pies. 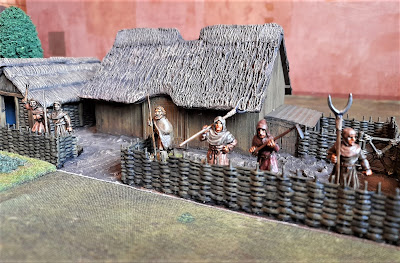 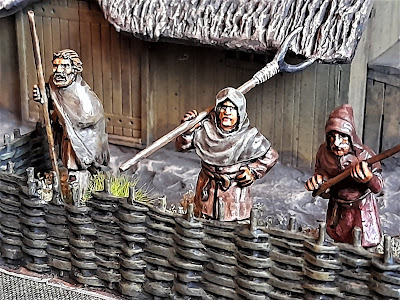 First card drawn from the pack brings the Bishop of Durham’s mercenary Welsh Bowmen onto the battlefield. 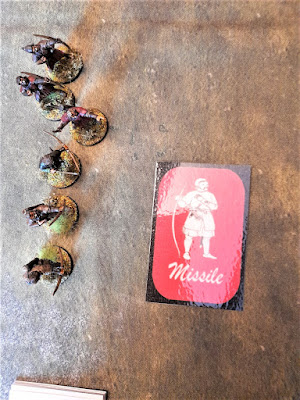 Gwydderig Gadd, the Bowmen’s leader, notices the queue at the Pie Shop. He’s not a happy Welsh Bowman. 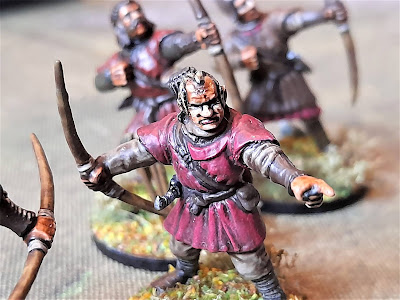 Things start to look pretty bad for the Locals, as the Bishop’s Spearmen arrive alongside the Bowmen. 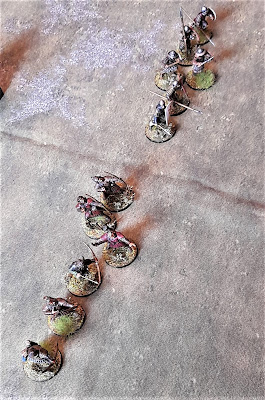 Finally, Hugo Flambard’s Bowmen deploy through the orchard and start to even things up. 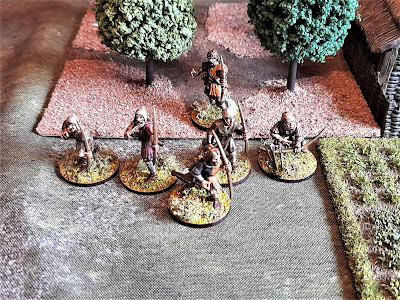 Hungry and eager to fill his empty stomach, Bertrand d’Mechants arrives and takes station between his two groups. 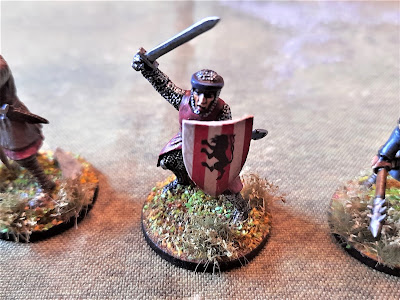 The Flambard Bowmen fan out and advance towards the enemy with their bold Captain, Jerrard Sibton alongside them. 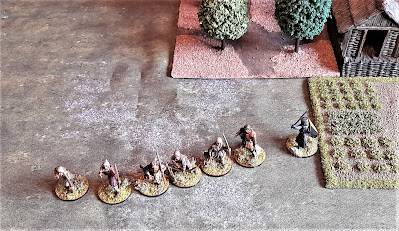 d’Mechants’ Spearmen seek shelter behind the isolated store house, while the Bowmen run to launch an attack on the Flambard Spearmen as they emerge from the orchard. 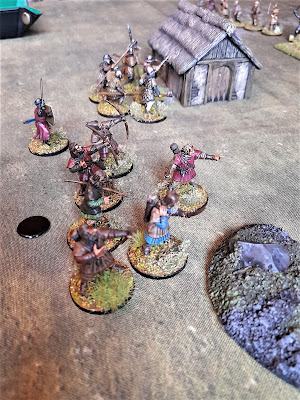 The “Bol de Porry” card has its first impact on the game, slowing down the Flambard Spearmen in the orchard. 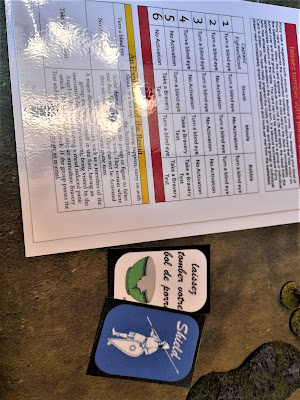 At last! The Spearmen manage to battle their way out of the orchard. 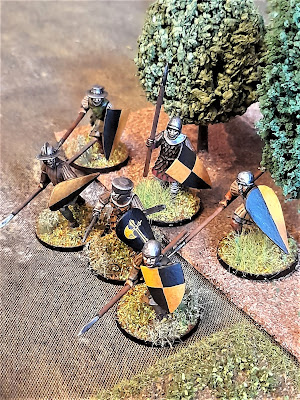 Sir Bertrand has had enough… he throws caution to the winds and hurls himself towards the waiting queue at the Pie Shop. 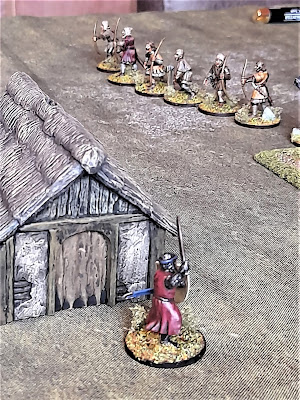 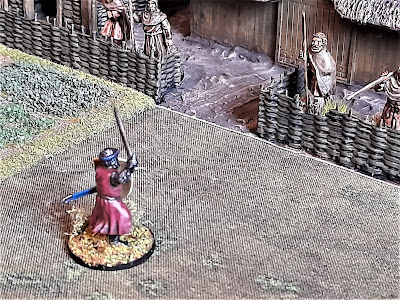 Determined to claim his beef and onion pasty, Sir Bertrand crashes into the queue, fighting at a disadvantage over the wattle fence and, unbelievably, loses the combat to a lowly local peasant! Good manners cost nothing! 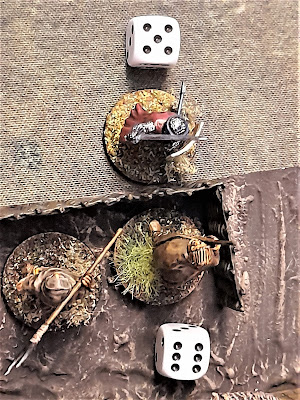 Sir Bertrand suffers the humiliation of being wounded and is pushed back, leaving him even further from his pasty than he was before. 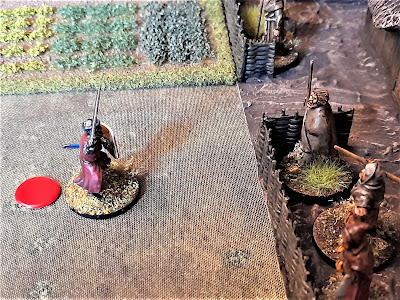 Meanwhile, the Welsh Bowmen have brought down two of the Flambard Spearmen. Suffering two casualties, the Spearmen take a Bravery Test and get pushed back through the orchard… it’s just not their day. 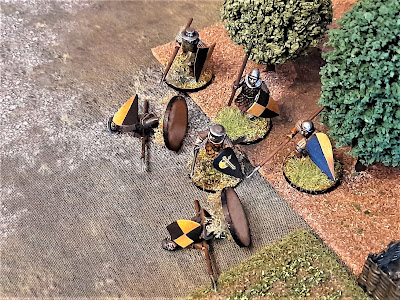 Working their way inexorably round the flank, the Flambard Bowmen pick off their first victim of the encounter. 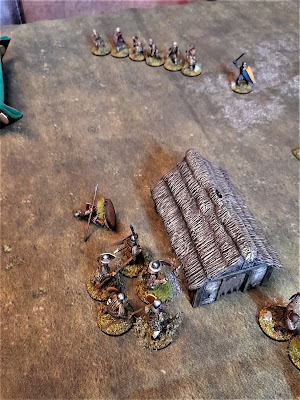 Sir Bertrand’s Spearmen move out of sight of the enemy and the two groups of Bowmen square up for an archery duel. 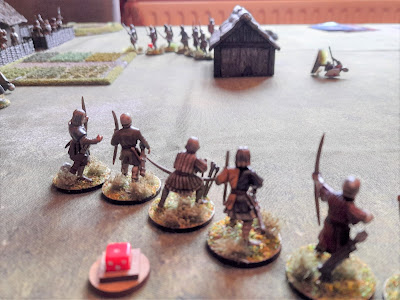 First blood to the Flambards as two evil Welshmen bite the dust. (At this point, the Welsh should have taken a Bravery Test, but in the excitement of the moment I forgot!) 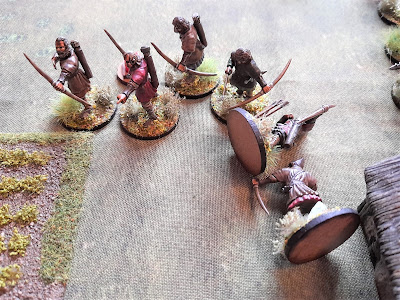 The skies fill with arrow shafts and the superior skill of the Welshmen (combined with my forgetting the Bravery Test) results in no less than three Flambard Bowmen going down. This is turning into a very high price to pay for a pasty. 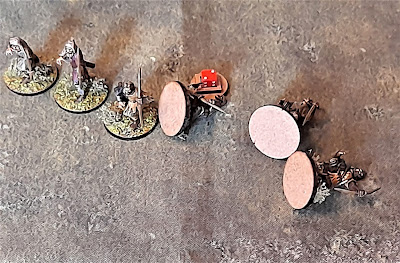 Suddenly aware that Jerrard has inadvisably moved ahead of his Spearmen, Sir Bertrand ignores his wound and Engages his opposite number in combat. 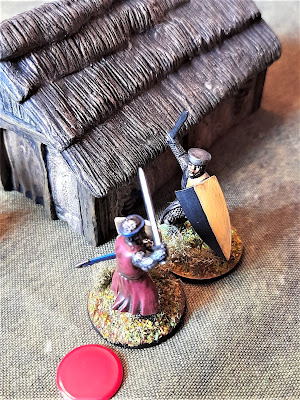 With his pasty still in the oven, Sir Bertrand is struck a mortal blow by Sibton and collapses in a heap on the blood-stained earth. “Oh perfidy and a beef and onion pasty!” he cries, before exhaling his last gasp. 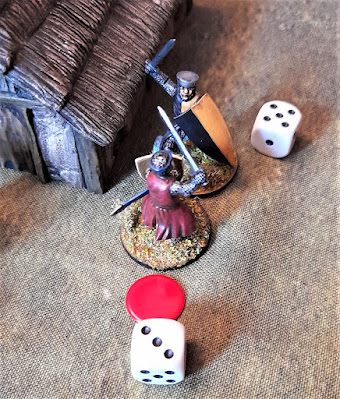 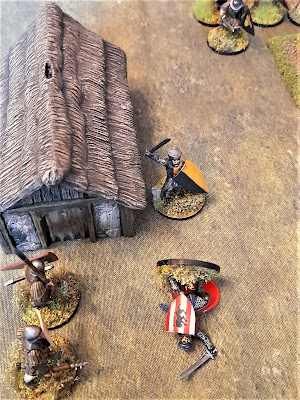 With their Captain struck down, the Spearmen take a Bravery Test (I remembered this time!) and are forced to retreat away from the Pie Shop. The Bowmen, having used all their ammunition, decide to call it a day and leave the pies to the victorious Flambards. 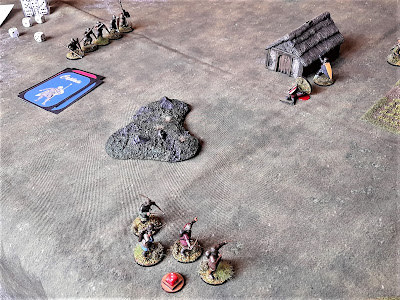 The battle draws to a close and victory and the pies go to the Flambards. Nine men will never taste a pie again but, on the bright side, that leaves more pies for the survivors. 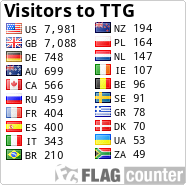